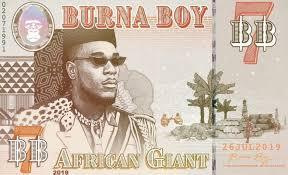 Burna Boy’s new album is in the oven and we are about to be served with an electrifying afrofusion “African Giant” album. This album ought to give you tingles with the already huge tracks released with the likes of “Ye” , “On the low” and “Anybody” people should be prepared for this launch. His recent collab with UK hot shot rapper Santan Dave on “Location” has set up his album quite perfectly. So the release is highly anticipated.

This album is going  send goosebumps , I can’t wait to see what other masterpiece tracks Burna has in store for us. Every jam already released is an absolute beauty .This is Burna Boy’s fourth studio album with a 19 track roaster set to blow your mind.

The full album is set to drop on the 26th July . Burna Boy hasn’t dropped any hints of features on the album but if any they sure will be good with hit songs like “Gbona” being the first release of the album, I know this album is going to be blazing hot . This is truly Burna Boy’s year and let’s not leave out his feature on Beyonce’s “The Gift” album. Burna Boy is doing pretty great, every time he shoots, he scores.