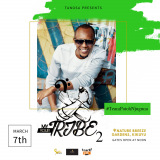 /> In 2010-2011 he recorded and released his first album, My Inspiration My Paradise before joining Brookhouse to study BTEC in Music. After Attaining his Diploma he worked at Brookhouse for 2 years as a sound engineer.

His first release after school is Disco a song that features Eric Wainaina and Frasha.

His voice and songwriting techniques have often been compared to established international artists such as Phil Collins, James Blunt and Bruno Mars.

Patoh Njuguna is set to be one of the most influential musicians in Kenya due to his vast knowledge in music theory and his agility. He also has skills in sound engineering. (more)
Promote artist ↑
report
Get Latest DJ Mixes
More Songs