MDUNDO MUSIC AWARDS: Meet The Only Underdog On The Gospel Nominee List

Danny Gift who describes himself as a young saved, spiritual and upcoming music minister, started his musical journey back in 2008 in group known as Fisherz of men and later went solo in 2010 and after that decision,  the world couldn’t  thumbs him up more loudly than through his 2015 Mdundo Music Awards in the Most Downloaded Category ! 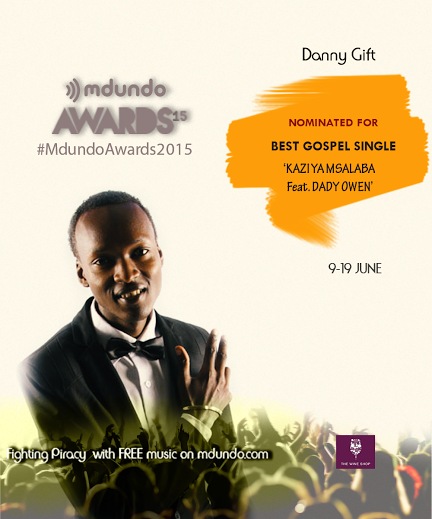 His song alongside Gospel music legend Daddy Owen ‘Kazi Ya Msalaba’, is responsible for his nomination and as the category clearly says, it is heavily downloaded by fans and Mdundo users everywhere.

In the song he talks about the gravy of working under the wings of Christ and by the look of things, it’s the best place to be. However he will be  up against some of the biggest music acts who also have the heavens up their sleeves and all are in tight prayer that they win.

MDUNDO MUSIC AWARDS: Bahati And Willy Paul Are It Each Other's Necks Again!

Let us know who you see taking the award for the Most Downloaded Gospel Singles via the Mdundo social media pages and our YouTube channel.