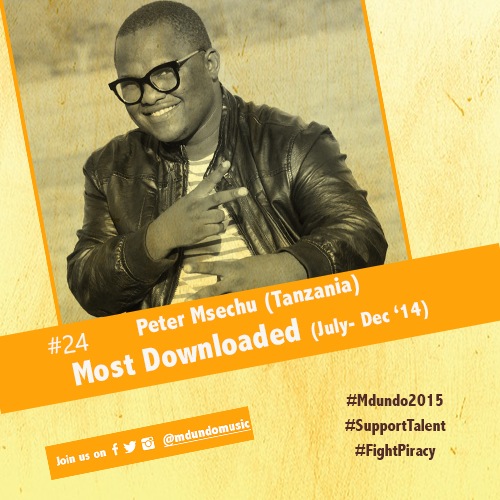 Each year music experts break out the crystal ball and predict which artists will do what, who will win awards, who will be setting trends etc. Peter Msechu is a good pick for 2015!

The ex-TPF4 competitor is on the list of Mdundo's 25 most downloaded African artist between July and December 2014, and in the first half of this year he could rise dramatically. From #24 to, prolly somewhere within TOP10, a prediction that stands out!

He showed a good year, with a successful hit like Nyota featuring Amina from Tanzania which got him a huge number of downloads July-December 2014.

Msechu came into the Kenyan limelight in 2010 when he joined the Tusker Project Fame Season 4 as a contestant from Tanzania.

He became a favorite to many East Africans as he combined music with comic lighting up the TPF4 any time he got the chance.

Earlier on in 2014 when he joined Mdundo, Msechu explained that this is one of the platforms he’s been looking for to connect with his fans all over East Africa and especially Kenya where he officially kicked off his music career.

“I’m grateful because I now have a platform where I can share my music to all my fans all over East Africa and the whole world”.

That statement has seen him rise from nowhere on the list to Mdundo’s 24th most downloaded artist 2014. The full list had 3999 African artist. View here Mdundo Annual Report 2015

Congrats to him. We wish Msechu a better year ahead. To get all his music on Mdundo, click on the profile button below.