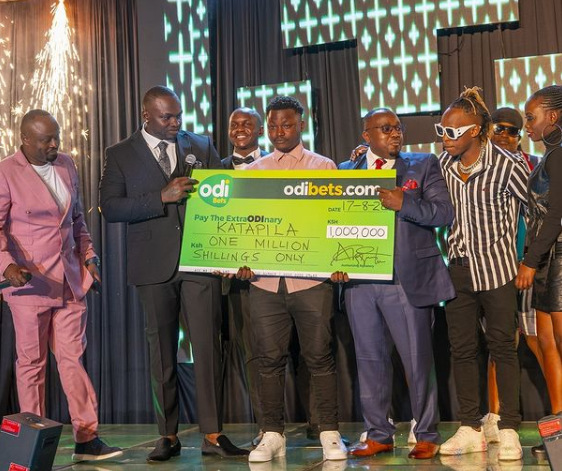 Fast-rising Kenyan rapper Katapilla has won a million Kenya shillings in Khaligraph’s widely publicised Odinare Challenge. Talking to his Instagram to introduce the new millionaire in town, Khaligraph took the opportunity to congratulate Katapilla as well as the other five contenders who were walking away with a cash prize as well as a recording deal from his Record company Blu Ink.

“Introducing the newest millionaire in town! As per Your votes I want to Congratulate Katapilla on winning the inaugural #OdiNare Rap Challenge grand prize of Ksh 1,000,000. The OdiNare rap challenge finals winners:1. Katapilla - Ksh 1,000,000, 2. BenC - Ksh 500,000, 3. Real Elisha Elai - Ksh 300,000. And 50k each for the remaining 3 finalists Namely Achicho Dimpoz, Murasta and Shekina, all this comes with a recording deal at Blu Ink for all the Top 6 contenders,” part of his post read.

In addition to announcing the prizes, Khaligraph also celebrated the success of the challenge, explaining that he had not anticipated the growth of the challenge when he started. He further noted that he hopes to do a more organized and structured challenge in the near future.

“Congratulations to all participants, finalists and winners. When we started this thing we did not anticipate that it would grow and become as big as it came to be, hopefully we will be doing it again soon in a more organized and structured manner but all in all we are grateful. Thank So Much Guys Cc @katapilla8 @_murasta_ @shekinakaren254 @real_elai @bencagain @achicho_software @odibetskenya,”he added.