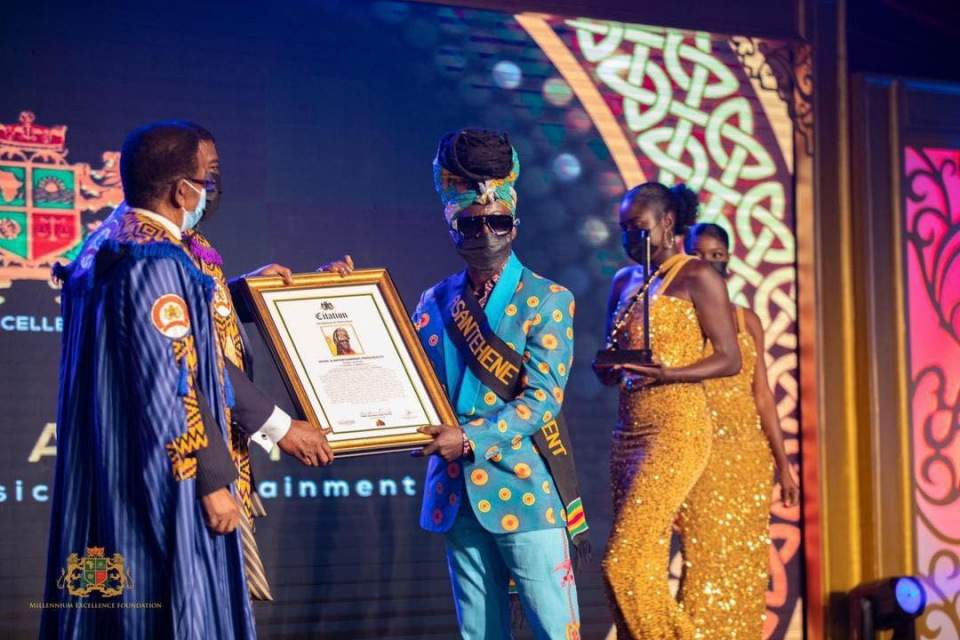 Kojo Antwi, one of Africa’s music legends was last weekend appreciated at the 2021 edition of the Millennium Excellence Awards. The appreciation was for his vast and exceptional contribution in the music industry not only in Ghana but also Africa and the world entirely,

During the ceremony, Kojo, who has been in the music and entertainment industry for more than three decades performed together with Sona Jobarteh another gifted African songstress and manifold award winner.

Present in the audience was the President of Ghana, Asantehene Otumfuo Osei Tutu II, Minister of State, Nana Addo Dankwa Akufo-Addo, amongst other celebrities.

Kojo was presented with a citation that reads:

“Congratulations! “Congratulations! “Congratulations! The Life Patron, HRM Otumfuo Osei Tutu II – Asantehene, and the Illustrious Board of Governors of the Millennium Excellence Foundation are pleased to confer on you the coveted Millennium Excellence Award for Music and Entertainment Personality in high recognition of your music career and contribution to national development. "The Foundation salutes you, Mr Music Man, as fans affectionately call you for your long stellar career as a musician. You stand out arguably as the best living legend in the music and entertainment industry right now. "Your music transcends minds, culture, religion, ethnicity, etc., and speaks to, connects with, or touches people in unimaginable ways. You have mastered the art of using your melodious voice in a sensual way that stimulates both the cognitive and emotional beings of your audience on some of life's most intricate realities.

"Your sweet, melodic, seductive voice seems to enhance both young and old alike as many have fallen in love with your music. But in a duality of purpose, you also raise several life issues and advice with the same music. "As a consummate vocalist, prolific songwriter and producer, and an animated performer, Kojo was already a Super Star called Mr. Music Man. All that is missing from your shining cape is the royal autograph which is now affixed.”