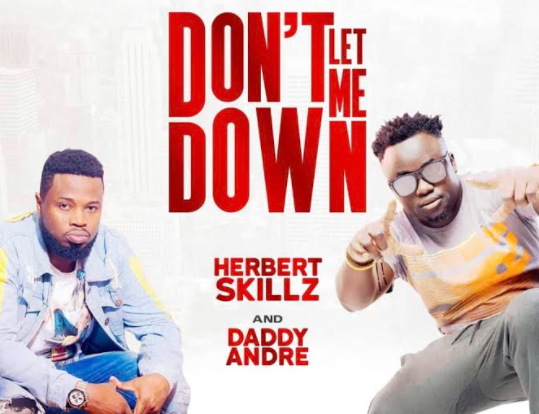 Celebrated Ugandan producers Daddy Andre and Herbert Skillz who also double up as artists have teamed up on a new jam dubbed 'Don't Let Me Down'.

In 'Don't Let Me Down', the two promise this girl that they will never leave or let her down. Despite the many fights and arguments, they vow to always stick together, adding that everyone will know that they are meant for each other. In return, he also begs her not to betray their love.

Quite different from his other songs where he features artists who do the singing, Herbert Skillz decded to sing through the second verse of ‘Don’t Let Me Down’.

The lyrics and the song’s production were done by Daddy Andre and Herbert Skillz.

Daddy Andre and Herbert Skillz have made an impact on the music industry both locally and internationally. Herbert Skillz is credited with being the man behind a number of top hits and last year, he hit a career milestone after he was selected to feature on legendary Senegalese-American singer Akon's album titled ‘Akon and Friends Remastered’.

He specifically worked on 'In My Arms' with Alonestar  and Whyne Wonder.

Daddy Andre on the other hand, is not only one of the best songwriters in the country,  but also a top producer to go to when you need an amazing jam.