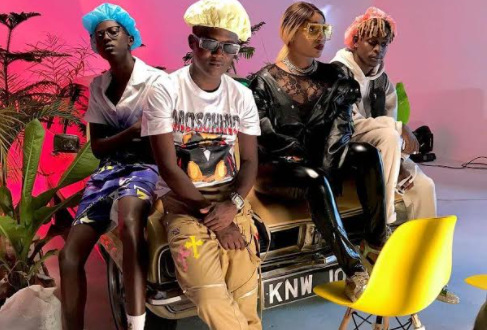 This is after it maintained a trending streak on YouTube, having topped the charts for quite some time right from its release on December 31, 2020.

The track by the super talented Kenyan Gengetone group Mbuzi Gang members; Joefes alias Mr Nun, Iphoolish and ‘The hook master’ FatherMoh featuring one of Genge’s founders and star, Mejja has so far garnered an approximate 2.9 million views on YouTube hardly 4 months since its release into the market.

Shamra Shamra also remained a preferred jam among radio stations after a majority of listeners voted it as their favourite track in various music shows.

The jam swept many fans of their feet, both locally and Internationally as they (fans) went ahead to demonstrate their love for the track by reposting its official video on their social media timelines as well as posting video clips of themselves rhyming and dancing to the song.

Also, probably as a result of the track’s main theme being basically celebrating and having a good time, fans have gone ahead and made it a routine of jamming to the track during joyful ceremonies and other forms of social gatherings such as picnics and get togethers hence making it a street anthem not only in Kenya but also in other parts of the world.