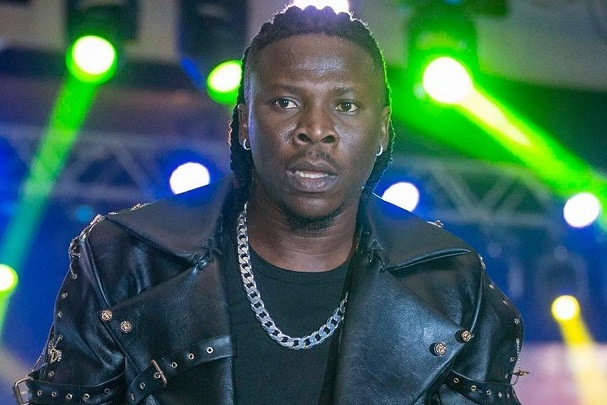 Ghanaian Afropop, dance hall and reggae singer Livingstone Etse Satekla, better known by his stage name Stonebwoy has released a brand-new freestyle titled ‘We Move’.
Stonebwoy’s new song that has been produced, mixed and mastered by Nektunez addresses his Twitter confrontation with his former label boss Samini.
This comes after Samini called out Stonebwoy for not being ‘real’ enough in a series of tweets with Stonebwoy choosing not to escalate the situation by tweeting he wasn’t going to respond through social media.
‘Make dem dey there as they yob and dem dey tweet, me I dey move around the world and I dey do it’. Basically, from those words one can tell that song is talking about people who sit around bragging and tweeting while he is busy around the world working.
Samini having been the most recent person to go after Stonebwoy with series of tweets, the above lines can serve as a reply to him.
Stonebwoy has also been featured on Sean Paul’s new single ‘’Guns of Navarone. ’together with Jamaican Singer Jesse Royal and Jamaican poet Mutabaruka.
The ‘Guns of Navarone’ song talks of violence in Jamaica with a young man protecting his sister after their fathers’ death, and continually throughout the video. It is his protectiveness that lands him in prison after he murders a man for violating his sister. Some years earlier, the video shows him receiving a gun from an older man. He returns from prison in 2021 and seeks a job but lands one as a contract killer. He is contracted to kill a man who was dating his sister, as it turns out. He ends killing his sister, whom he loves so much.