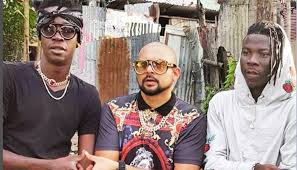 Ghanaian artist, Stonebwoy has made headlines after being the only non-Jamaican artiste to be featured by Sean Paul in his 7th album Live N Livin‘album.
It’s been over 6 years since Sean Paul released his 6th album. He made his official comeback with the 16 tracks album, which is executively produced by Sean Paul’s label Dutty Rock Productions and distributed by ONErpm.

Veteran artistes such as Buju Banton, Busy Signal and Mavado were featured in the album. Younger generation aristes such as Masicka, Jesse Royal, and Serani were also featured.

Nonetheless this is not the first collaboration that Sean Paul has done with Ghanaian’s Stonebwoy. The two once collaborated on ‘Most Original;’ a song that is off the former’s 2017 album ‘Epistles of Mama’ album.
While officially announcing his newly released album, the Jamaican superstar said:

“The album was inspired by the perception of members of the music industry that dancehall is dead, I believe dancehall is alive and well, with a strong pulse. Looking to show the world that dancehall is flourishing and still birthing stars. Live N Livin showcase over twenty artists on one body of work.”
“‘Live N Livin’ a solid dancehall project that will be perfect for the dance floor when the outside world opens back up.” Sean Paul concluded