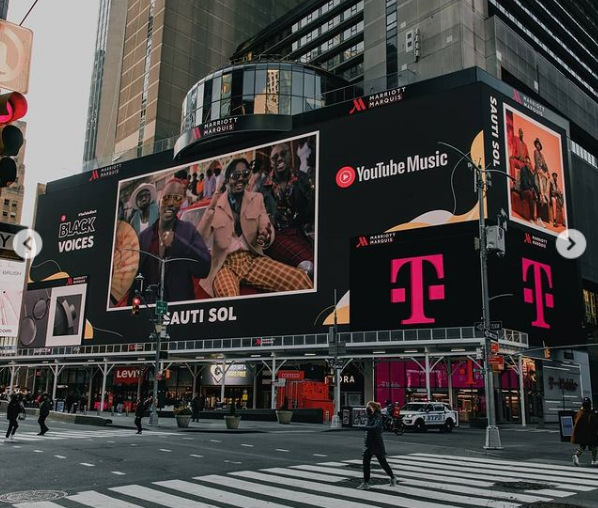 Celebrated Kenyan Group Sauti Sol has hit yet another milestone after appearing on The New York Times Square Billboard.

Taking to social media to celebrate the great news, Sauti Sol thanked YouTube music for allowing them to be heard globally.

The Class of 2021 is the first group of 132 Black creators and artists selected from around the world to participate in this new initiative dedicated to equipping black creators with the resources to succeed on YouTube.

Taking to Instagram to express their gratitude to YouTube music, Sauti Sol wrote a powerful message giving due credit to Kenya and East Africa at large.

“We're really excited to be part of the first #YouTubeBlack Voices Artist Class along with 20 other incredible artists. Our identity informs our sonics, our storytelling, and our fashion. Much like our country, Kenya, our music is multi-layered, with an East Africa groove. Our passion is for the craft and artistry of music, and our music is a soundtrack to people’s lives,” Sauti Sol captioned.

The song was released in February 2020 prior to their album release in June 2020. ‘Suzanna’ was a love letter dedicated to a lost lover who was being asked to come back home because somebody still loved her. Since the premiere, ‘Suzanna’ has been a fan favorite and currently has over 16 million views on YouTube.