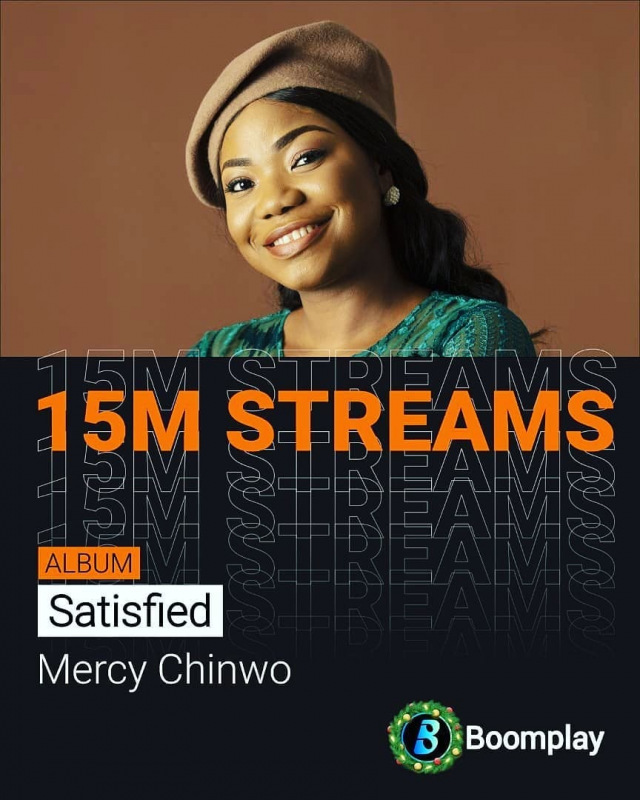 Taking oh her Instagram page, Mercy Chinwo thanked God for the progress, Boomplay Music for the recognition and she urged her fans to keep on listening and streaming.

"THANK YOU JESUS FOR THIS AND MORE Reposted from @boomplaymusicng So much love for @mercychinwo's #Satisfied album! Currently 15 million streams on Boomplay, well deserved!
Congratulations are in order! Keep listening and sharing. LINK IN BIO."
Satisfied is thick with spiritual hymns and uplifting anthems. The former Nigerian Idols winner is not only renowned for charming lyricism but also a powerful, searing voice. Satisfied was released on EeZee Conceptz Global, and is among the most streamed Nigerian albums for the year. The project also catapulted her to the second most streamed female musician on Boomplay in the sub-Saharan Africa region in 2020.
Her best song Chinedum which Premiered Jun 1, 2019, is now a success with over 20 Million views on Youtube.

Mercy Chinwo's full name is Mercy Nnenda Chinwo, born on 5th September 1990. She is the first child and the first daughter of six children. As of 2020, Mercy Chinwo is 30 years old. Mercy Chinwo is a Nigerian gospel musician, actress, and songwriter, she hails from Port Harcourt, Rivers State