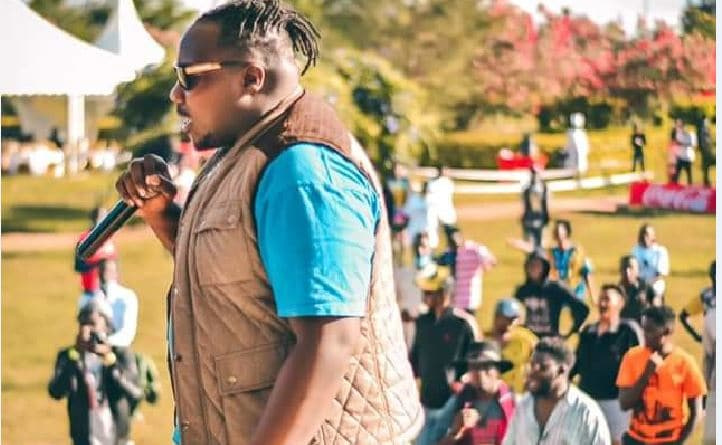 Renowned Television personality and upcoming Kenyan artist Willis 'Bazu' Raburu has dismissed claims that he was one of the organizers in the failed Gengetone Festival in Machakos this weekend.

In a social media video, Bazu stood in support of Gengetone artists who have been publicly calling out producers of the event reinstating that he had actually encouraged them not to perform until they were fully paid.

"The Gengetone Festival was not my event, if you look at the posters, if you want to see who organized the event, you can see at the bottom there are the official sponsors and organizers of the event. So it wasn't my event. I attended basically as an MC and as an artist," he said.

According to Willis, he was supposed to hype the crowd for upcoming artists to perform, then later on, the Gengetone Elite would take over.

"So we were getting ready for this, and I was MCing with my boy Shutterboy and as we were going through, I went to the backstage and started talking to the artists, because it wasn't so well coordinated. So I talked to the artists and most of them if not all of them told me that ‘hey we wanna perform but hey, we've not been paid, the half of what's left and the rule is always for most artists that unanilipa half ukiaanza kupush event, by the time am stepping on the stage namaliziwa’ , and rightfully so.

"So I told them guys si msiperfom, and you can ask them I told most of them that. I said 'don't perform if you’ve not been paid, don't get up on stage. I was on stage because mi nilikuwa na psych watu, I didn't know the cracks of the matter. Because hata mimi nilikuwa niende niitishe yangu,kabla nipande," he divulged.

Willis doubled down by highlighting the challenges that Kenyan artists in particular Gengetone artists have suffered in the hands of event organizers in the country.

"It got to a point where as we were talking to all these artists I started feeling really sad. Because we've had quite a year in terms of the Rona. So to tell artists that you guys, just perform and we'll organize this thing by another time, we'll get your money another time. How many times have they been told that, and wamerukwa. So, I told them, if you guys step on the stage and perform and you've not been paid, then we'll never break this cycle of people being taken advantage of, more so Gengetone artists." Willis recounted.

Citing the importance of Gengetone music in putting Kenyan music back on the charts, Willis asked Kenyans to extend the same respect they give foreign artists to our Gengetone artists.

"We gathered around and we started talking. The organizer was like, the money is available on the ticketing platform, but we have to wait to probably Monday so that we get the money to you guys. And that's when I started seeing certain realities from the managers of the artists saying 'bro we’ve heard this thing so many times. That time is around 8:14 pm the event is supposed to end at 9 pm, and we have 6 or 7 groups who are supposed to give their best, and they haven't been paid,” he said.

To sum up the experience Willis emphasized noted that it unfair for any organizer to have an event, and not pay the artist before they get on stage since being an artist is a craft that they (artists) rely on to put food on the table. "