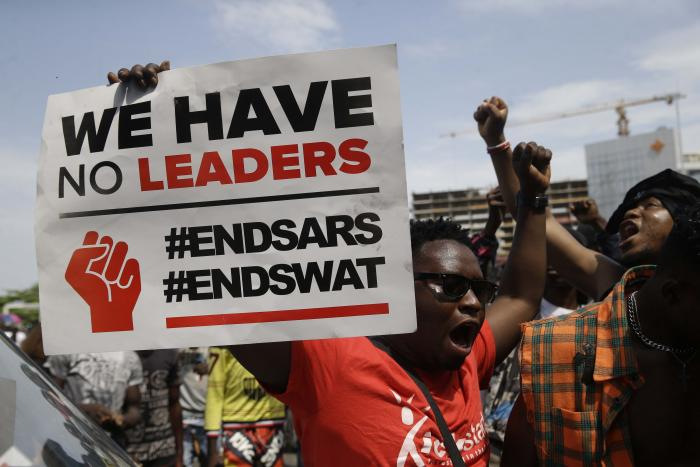 Nigerian youths at a past #EndSARS protest. (Photo Source: Human Rights Watch)
The whole world is currently shocked with the recent turn of events in Nigeria following reports that heavily armed military personnel opened fire at protestors in Lagos, Nigeria.

Several people who were protesting against police brutality and said to have been shot at, leaving dozens dead and many others injured.

The incident has attracted widespread condemnation from across the globe. It is unfortunate that protestors who were injured and others killed while calling for an end to police brutality.

Nigerian musicians have played an active role in pushing for the current wave of protests calling for reforms in the police force. We take a look at some of the past and recent Naija songs that talk about police brutality.

Ajebo Hustlers had released the original ‘Barawo’ song a few months ago before the #EndSARS protests started. At that time, the single ignited a campaign against jungle justice in Sub-Saharan Africa.

During the #EndSARS campaign, the popular music group teamed up with the American-born Nigerian singer Davido for the remix that talks about the diminishing state of the country, extrajudicial killings, and police brutality.

This is a song off Burna Boy’s recent studio album ‘Twice As Tall’ released in August 2020.

In the song in which Burna Boy featured English singer Chris Martin, it talks about colonialism and the oppression of black people worldwide. The song also has a message that seeks to empower the youths to fight for a change – exactly what they are doing today in Nigeria.

Being a multi-instrumentalist, bandleader, composer, political activist, Fela who a key critic of the Nigerian government, and he often used songs to pass his message.

He often sang about how Nigerians have lost their loved ones and sources of income due to the brutality of the Nigerian police and one song is ‘Sorrow, Tears and Blood’ released in 1977.

This is Nigeria – Falz

In this song, Falz says it “addresses numerous political and social ills”, and is an attempt “to spark a reaction in the positive direction”.

The song’s music video was released in May 2018, but watching it and listening to the message, you can relate with what is currently happening in Nigeria.

In ‘Oga’, Rudeboy documents the sad reality of the Nigerian crime questioning the greed and circle of power distribution by Nigeria's political elites and their disposition to corruption.

This legendary singer talked about police brutality long before the current situation in Nigeria – perhaps an indication that it is an issue that started a long time ago.

In ‘Police Brutality’, Majek Fashek expresses his anger and frustration at the brutality and harassments committed by the people who are meant to protect and serve citizens in the country.