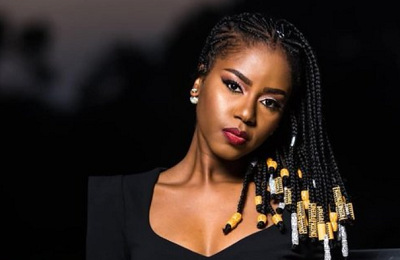 Award-winning Ghanaian female dancehall artiste, MzVee, has leaked the title of her upcoming album. In a recent appearance on the renowned cooking show, McBrown’s Kitchen, the 'Sherff' hitmaker, MzVee, revealed that the title of her incoming album is ‘Invincible‘.

She announced the name of the album after being a bit hesitant and attempting to seek approval from her managers who were behind the cameras on set.

MzVee could’nt hold it any longer as she broke out the news while wearing a broad enthusiastic smile, showing how happy she was about the album that the world is yet to hear.

‘This album talks about basically where I am coming from. I have gone through it all to get here and I’m a strong person and nothing can break me. So this album’s title is ‘Invincible‘. I’m not going to stop music”, she revealed.

MzVee bounced back into music in the beginning of the year after going away for almost two years. The musician said in an interview that she went into epression and the only place that saved her was the church.