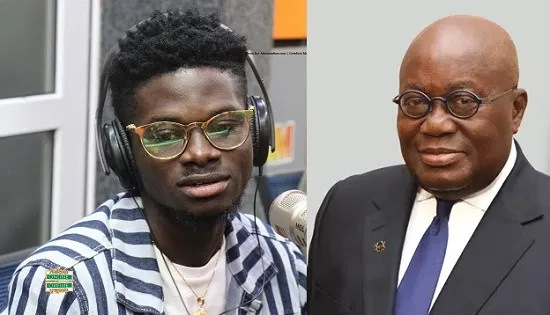 Vodafone Ghana Music Awards (VGMA) artiste of the year, Kuami Eugene, has hinted that he's ready to volunteer to do a song for Ghana's president, Nana Addo-Dankwa Akufo-Addo if only he makes that request.

Speaking on Cape Coast-based Kastle FM, he said he does not do campaing songs and that he’s not ready to do one willingly for President Nana Addo Dankwa Akufo-Addo because that’s not his lane.

The 'Open Gate' crooner however made it clear that should the President request a campaign song from him, he’ll gladly oblige to do it.

“No I won’t drop any campaign song for Nana Akufo-Addo. I’m concentrating on my job for now so Nana Addo should also work hard for the upcoming election," he said.

“I believe everyone should be in their lane so I don’t feel i must leave what I’m doing to join what someone else is doing.”

“Nana Addo Dankwa Akufo-Addo is my president so if he should invite me and request that I do a campaign song for him why not I will gladly oblige to do so.”

As we get closer to the December 7 polls, a lot of musicians are making their campaign songs ready for either the New Patriotic Party (NPP) or the National Democratic Congress (NDC) but most of their composition is meant to make money from the politicians ebven though the musicians have stated otherwise.