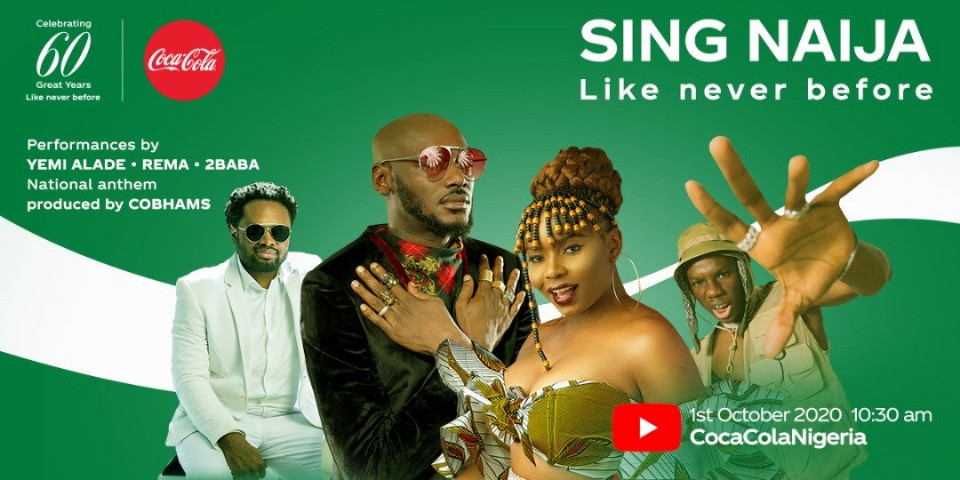 Photo: A poster of the upcoming virtual concert. (Source: Twitter/2Baba)

As Nigeria will be marking its 60th independence year, three of the biggest artists in the country will also be performing in an exclusive virtual concert.

The concert has been scheduled for October 1, the day Nigerians will be marking their independence day.

During the concert that will be streamed live on the Coca-Cola Nigeria YouTube channel, Marvin Records golden boy Rema, Afropop star Yemi Alade and living legend 2Baba will be performing. 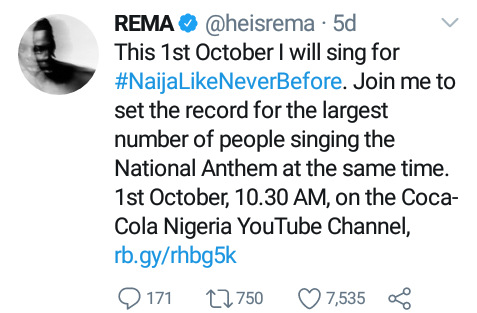 Part of the concert will see a record set in Nigeria "for the greatest number of people to ever sing a National Anthem at once".

"It’s going to be epic! Arise O Compatriots. Let the world hear us sing and celebrate in one voice. Let’s rep Naija like never before," read a statement on the Coca-Cola website.

"Arise O’ Compatriots! We’re celebrating our people, our culture, and our pride in being Naija! Be part of the celebrations with an exclusive virtual performance by @heisrema @official2baba @yemialadee & @cobhamsasuquo this October 1st, 10.30am! #NaijaLikeNeverBefore," the company added in a post on its official Twitter handle.

While confirming his participation in virtual concert, Rema rallied his fans to join him as Nigeria turns 60.

"This 1st October I will sing for #NaijaLikeNeverBefore. Join me to set the record for the largest number of people singing the National Anthem at the same time. 1st October, 10.30 AM, on the Coca- Cola Nigeria YouTube Channel," Rema tweeted a few days ago.

2Baba on his part said: "No shaking my people. Make una update una calendar, set your reminders because on the 1st of October we are celebrating #NaijaLikeNeverBefore together." 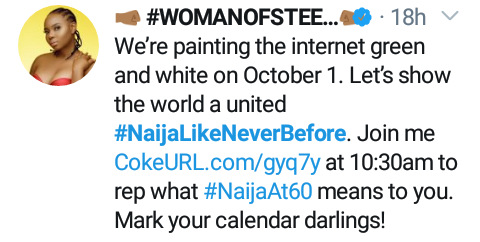 Yemi Alade also confirmed that she will be performing at the concert she wait will paint the internet green and white, which represents Nigerian flag colors.

"We’re painting the internet green and white on October 1. Let’s show the world a united #NaijaLikeNeverBefore. Join me https://t.co/igAt8MNupR at 10:30am to rep what #NaijaAt60 means to you. Mark your calendar darlings!" she tweeted