Controversies and Surprises that Surrounding VGMA21 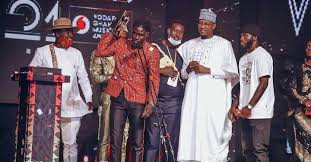 The VGMA21 edition came with a lot of surprises to many artistes and was a disappointment to other artistes, who had high expectation of winning awards.

Unlike the previous year’s , this year VGMA ceremony surprised many Ghanaians as it had most of the artiste win awards for the first time. Nonetheless, just like the other years, this year’s ceremony also generated a lot of discussions and criticism as to why some undeserving artistes won certain awards, while other more deserving artistes were left out.

There were at least 10 artistes who won VGMA awards for the first time in 2020 and they include the artiste of the year Kuami Eugene. Lynx Entertainment record label signee Kuami Eugene pulled a surprise when he grabbed the topmost award, “Artiste of the Year,” beating other top artistes such as Sarkodie, Medikal, Diana Hamilton and Kofi Kinaata.

Other surprises came from artistes such as Kwesi Arthur. Who beat the renowned rapper Eno Barony for the “Rapper of the Year” category, and Ras Kuuku, who won his first “Reggae-Dancehall Artiste of the Year” award in the absence of the biggets Ghanaian rappers Shatta Wale and Stonebwoy, who were disqualified from taking part in this year’s VGMA because of their misbehavior during the 2019 VGMA.