Rema's New Video 'Ginger Me' Starts Off On A High

The visuals which came after Rema's silence for a while seems to have started off on a positive not as within 6 days, they have already been watched over a million times on YouTube.

Taking to his official Twitter handle tl celebrate the latest achievement, Rema thanked his fans for always supporting his music. 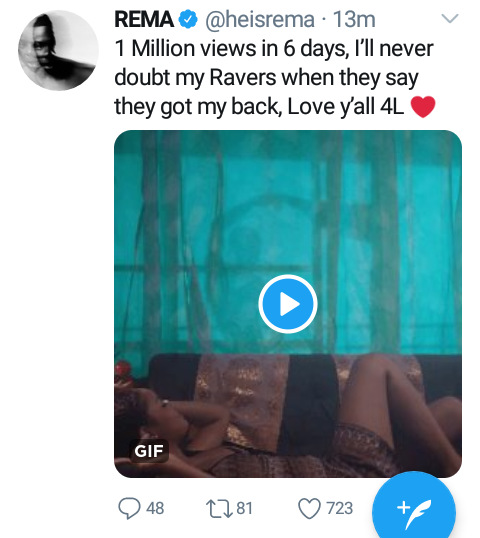 "1 Million views in 6 days, I’ll never doubt my Ravers when they say they got my back, Love y’all 4L," he tweeted.

The 'Woman' visuals were published on August 25.

The 'Ginger Me' song had already hit over a million views on YouTube without visuals and now with an official music video, the song is set to enjoy massive airplay on TVs.

Produced by The Element, a team that creates music and sound for the world’s biggest brands, 'Ginger Me' sees Rema confess his love and affection to this beautiful girl that he is attracted to.

The song can basically be described as a fusion pf diffrent genres among them Soul, pop, Afro-Indie.

Rema who started his music career in 2019 has already won several awards.

On 19 October 2019, he won Next Rated and was nominated for Viewer's Choice at the 13th edition of The Headies.

On 12 January 2020, Rema received the Souncity mvp for best new artist. A few months later, on 15 June 2020, Rema was nominated as Best Viewers Choice: International Act on the 2020 BET Awards alongside Burna Boy and Wizkid who were the only Nigerian Artistes nominated for the awards edition of 2020.