Stonebwoy Receives Plaque for being Most Streamed Ghanaian Artiste 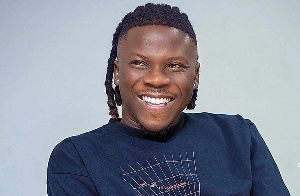 Award-winning Ghanaian dancehall artiste, Stonebwoy, has taken delivery of plaques from Boomplay for being the Ghanaian musician whose songs were streamed highest on that platform.

This award is in recognition of the amount of traffic on the streaming platform.In 2019, Stonebwoy was ranked as Ghana’s most streamed musician on Boomplay.

To certify this, Boomplay presented plaques to him to recognize this feat.

In a post on Instagram, Stonebwoy expressed his excitement with the plaques and thanked his fans for the support.

The Putuu hitmaker assured them of more hit songs.

“Finally they are here and I’m excited to say that your favourite artiste is raking up the numbers on Boomplay. I’m grateful to everyone who loves Ghana music and has been streaming and supporting us. Big ups to bhimnation”.

Among the songs that helped Stonebwoy chalk the feat is Shuga which featured Beenie Man.