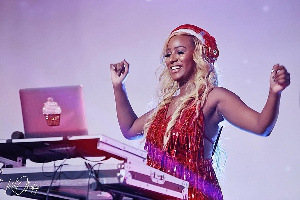 Ghanaian musicians Stonebwoy and Efya have been featured by Exciting young DJ and producer Cuppy on her ‘Original Copy’ album that was released on 21st August 2020.

The recently unveiled debut album “Original Copy” has featured a number of high profile musicians as she taps into the “neo-Afrobeats.” The 12 track album encompasses a variety of themes that range from independence, to love lost and African pride.

The LP features singles ‘Jollof On The Jet’, the global sensation featuring Rema and RayVanny that has charted in over 15 countries, and the recently-released ‘Karma’ featuring award-winning dancehall star Stonebwoy.

Dj Cuppy explained that putting together the LP was not easy “I went back to my roots, where I am from; Epe (a small Town just outside of Lagos, Nigeria) and mixed with the locals, I visited my family’s farm and recorded lots of ambient and animal sounds. If you listen very carefully you can hear these in each track”.

Nonetheless, the DJ, producer, philanthropist and Apple Music Radio host, was happy with the outcome of the album and further said; “I am so proud that the album is now out. For me it's not about numbers and statistics and charts. It’s about the fact that I was able to focus and actually achieve my dream of having an album. So honestly, I’m already happy regardless of what happens. Nonetheless, I encourage everyone to join this journey and I hope they enjoy listening as much as I enjoyed making this album.”