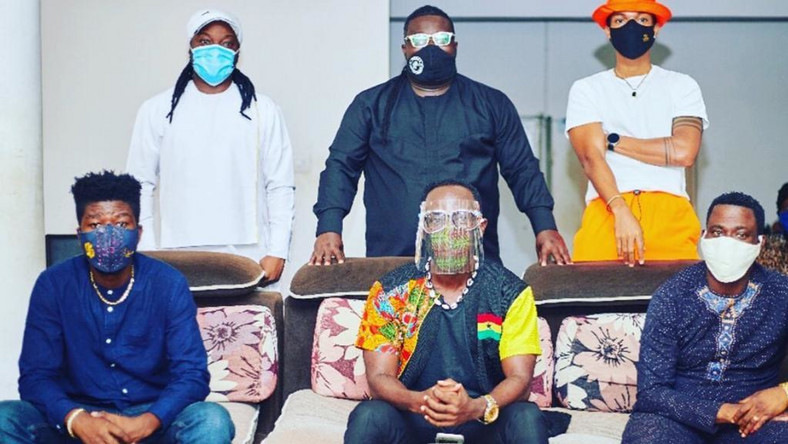 Ghanaian entertainment critique, Arnold Asamoah-Baidoo has lambasted a group of musicians who paid a visit to Obour to solidarized with him after losing the NPP primaries.

Commenting on a photo Okyeame Kwame shared from the visit that shows KiDI, Tic, Sidney, Great Ampong at Obour’s home, Arnold described it as “a very useless venture” whilst speaking on Peace FM.

“We went to say Ayekoo to him for trying to do what most musicians are afraid to do. I know that very soon one of us will be in parliament to fix our industry,” the caption of a post made by Okyeame Kwame read.

The musicians, clad in beautiful apparels with nose masks posed for a picture to crown their visit.Their decision to visit Obour, according to Arnold Asamoah-Baidoo is repugnant. The visibly angry entertainment critic making a submission on Peace FM monitored by GhanaWeb argued that it is hypocritical for any musician who failed to support Obour during the election process to visit him in the name of congratulating him for a good job done.

“If they had kept the visitation private, I wouldn’t have had a problem with it. Once it’s in the public domain, I have every right to speak. What tribulation didn’t Obour face? How many of them came out to support him?” he queried in fury.

According to him, with the exception of Okyeame Kwame who supported Obour publicly, none of the aforementioned threw their weights behind Obour.

“They better stop being hypocrites. How many of these guys, apart from Okyeame Kwame, supported Obour during his rigorous campaign? In days leading to the election, D Black, A Plus came out to say they don’t support Obour. Those who went to visit him after he lost, what did they say about that? You people should clear off with your nonsense,” he fumed again.