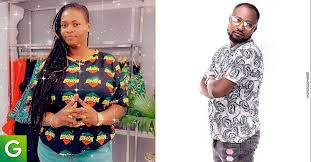 Stonebwoy’s girl Ayisha has helped Funny Face break his zero sales record of his album, Animal Kingdom since its release buy buying 200 copies of his album.

The Album since Funny Face announced it, has recorded zero sales despite all the marketing strategies used by the comic actor and musician. Nevertheless, Stonebwoy’s girl Ayisha, has finally broken that record by buying 200 copies of the album on the spot which made Funny Face very happy.

This took place days after the Comedian come musician, Funny Face,took to social media to plead with Ghanaians to buy his album, titled ‘Animal Kingdom’.His plea comes after the album recorded zero sales on the many digital stores the album was uploaded onto.

The comic actor some weeks ago had told his fans he cared about no one when he had issues with his baby mama. Funny Face believes his actions then might have caused his sales to dwindle and this issued an apology.

According to Stonebwoy’s Girl Ayisha, she bought the album so she can share to her friends and loved ones on her birthday since she can’t listen to all at the same time.