Get Used To It, Rema Tells Critics Of His Music Style 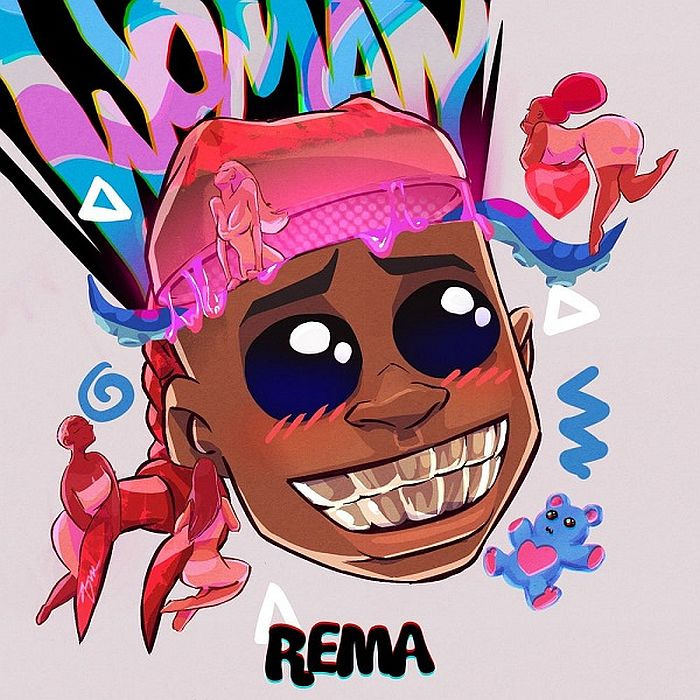 Nigerian singer and rapper Divine Ikubor known professionally as Rema has told off critics of his style of music.

Apparently some quarters in the music industry are not impressed with Rema's style of music, influenced by his Benin culture, which they often describe as wiered.

Rema who in 2019 signed a record deal with Jonzing World, a subsidiary of Mavin Records is, however, not bothered with the critics.

In a recent tweet, the 20-year-old singer said he is proud of his culture and he will not be ashamed to use it in his music.

The singer who rose to prominence with the release of the song "Iron Man", which appeared on Barack Obama's 2019 summer playlist further told his critics to be used to his style of music.

"I’m a proud Edo boy, I’ll forever celebrate my culture, I no go shame to use my Benni lamba, they can call me crazy all they want because they don’t understand it but I will never box myself to please anybody. When I hear beat I must misbehave! get used to it," he tweeted. 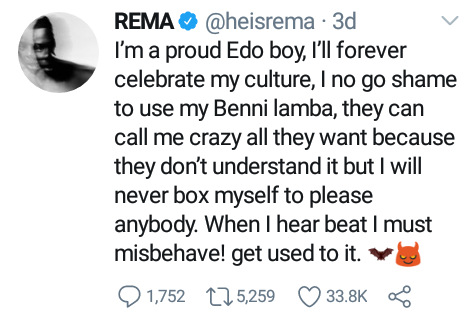 Rema was born into a Christian family in Benin City, Edo State and grew up singing and rapping while in secondary school.

He attained his primary and secondary school education in Edo State.

Rema's influence in the global music industry has been growing and was recently named the Up Next artist by Apple Music.

On 19 October 2019, Rema won Next Rated and was nominated for Viewer's Choice at the 13th edition of The Headies. On 12 January 2020, he received the Souncity mvp for best new artist and later in June he was nominated as Best Viewers Choice: International Act on the 2020 BET Awards alongside Burna Boy and Wizkid, who were the only Nigerian Artistes nominated for the awards edition of 2020.

Rema has recently dropped back-to-back vital hits that affirms his place as the next big thing in the music industry.

He is currently enjoying massive airplay thanks to his latest hits 'Ginger Me' and 'Woman' all released within a month.