Juliana Explains Why She Chose her Music Career over Radio Job 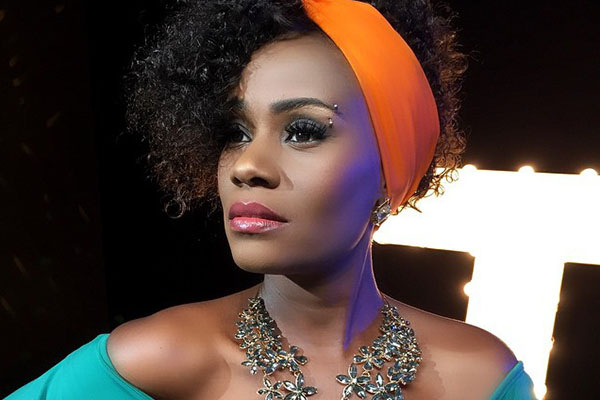 Juliana Kanyomozi started her professional music career in the 1990s as part of the I-Jay girl group, together with songbird Iryn Namubiru.

After they parted ways, Juliana Kanyomozi embarked on a solo career, releasing her first recorded song in 2000.

At the height of her career, Juliana Kanyomozi decided to take on a radio job side to side with her music. She worked alongside popular radio presenter Gaetano Kaggwa at 91.3 Capital radio.

Mid-way through her job at the station, her Programs Director gave her an ultimatum to either choose music or her radio career.

On her Twitter handle, the 'Still Here' hit maker revealed that she had to give up radio despite the huge pay for the love she had for music.

The new mother says she was at first scared of the challenges ahead, but with faith, she made the bold move and is thankful for the growth and independence level she is at now.

"If you’re a Sanyu Fm employee, this might be the time for you to rediscover yourself, your other talents. Leaving Capital FM was one of the hardest decisions I ever had to make, I was comfortable with a guaranteed salary and other benefits. But my PD at the time asked me to choose btn a music career and a radio job. I chose the former.

“I didn’t know what I was going to find out there, in fact I was scared, but I took the leap of faith. Today I’m thankful for my growth and independence. I wouldn’t have achieved half of what I have if I’d chosen the “safety” of being employed with a salary. A job with a salary is a good thing don’t get me wrong. But if you want to achieve bigger, sometimes you have to take that leap of faith," Juliana Kanyomozi concluded. 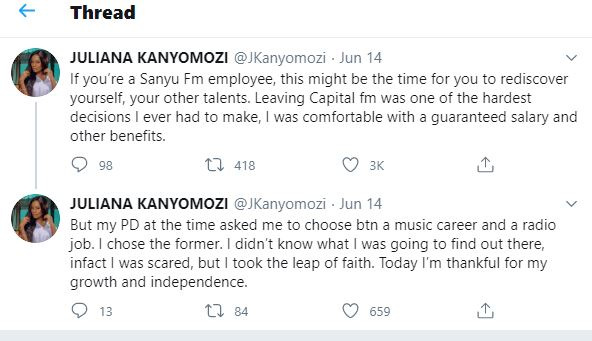 Juliana's revelation comes as a special piece of advice to Sanyu FM's employees who laid down their tools due to a 25% salary deduction.