Kurl Songx Featured by Lb Erazy and Otwo in 'Seniwa' 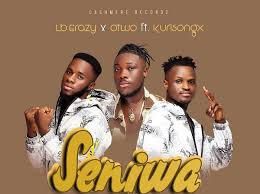 The song is a blend of Afro-pop and High-life genre music, beautifully produced by Klassic Beat. The experience and voice of Kurl Songx on this tune gives you the feel of quality the track is made of.

Kurl Songx has disclosed that he does not regret leaving the teaching field to pursue music because it is his passion.The ‘Jennifer Lomotey’ singer, who spoke recently in an interview with NEWS-ONE, stated that he was a professional teacher at the Brainy World International School at Kokomlemle in Accra for about two years. However, he had to move on also because he was struggling to survive at the time.

“It all started in 2016 when I was a teacher. I woke up one morning and decided to search for a different job. I was struggling here in Accra and that time I was teaching,” he revealed.

He believes that Lb Erazy and Otwo chose him because he is the because he is good at what he does. “Seniwa” is currently available on all streaming platforms and also receiving airplay and positive reviews on most media houses.