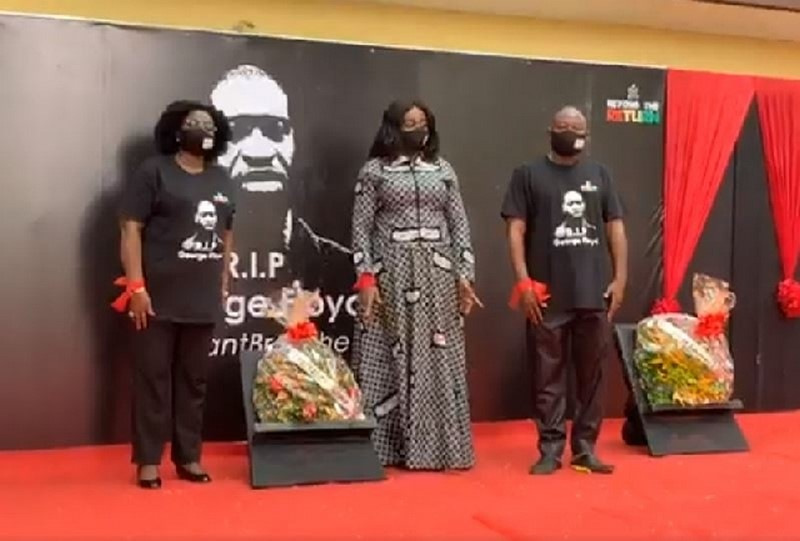 The Ghanaian government through the Ministry of Tourism, Arts and Culture, held a memorial service in honor of George Floyd's in Accra on Friday the 5th June 2020. George Floyd's an African American man who died during a police arrest in Minneapolis.
The people converged at the W.E.B Dubois Centre in Accra to lay a wreath in solidarity demand for justice for the late black man whose killing by white police officers has sparked a lot of protests around the world.

The Community laid a wreath on behalf of their members while Minister of Tourism Barbara Oteng-Gyasi also laid one on behalf of government and Ghanaians. The two-hour solemn ceremony had the US Ambassador to Ghana Stephanie S.

Sullivan as one of the speakers with Nana Kobina Nketiah, Chief of Esikado also taking to the podium. CEO of the GTA said they were there to show solidarity with the grieving community because of how they honored President Akufo-Addo’s invitation last year for the ‘Year of Return’ program which was a huge success.

He said the President sent a message to the Diaspora Community of Ghana and Diaspora African Forum Ghana to commiserate with them. Mr Agyeman pledged his outfit’s continuous support to them in order to make them feel at home.

On his part, International Evangelist Dr Lawrence Tetteh said the incident should be condemned in no uncertain terms since this is not the first time a black man has been murdered in such cold blood. “We need a mass united front to win the fight against racism,” said he said.

Watch the video of the event on
https://www.youtube.com/watch?v=u6rZC0pTJc8