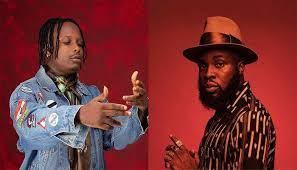 Dancehall artiste and Burniton Music boss, Stonebwoy has finally spoken on the alleged beef between him and rapper M.anifest.

Both artistes were in the news in December 2019, for some alleged misunderstanding over the breakdown of the relationship between Stonebwoy and former protégé Kelvynboy.
But speaking on Joy News, the Bhimnation CEO dismissed any suspected undertones of antagonism.

“I think M.anifest just did a verse. He was not involved in anything. After the verse he did, the masses and some of the comments pointed out some things that I think he would go and check later and be like ‘aww… was this what I just got involved in?’ So taking it from that perspective, I didn’t hold it too hard,” he said. Speaking in an interview on JoyNews TV, Stonebwoy made it known that there’s nothing personal between him and M.anifest.

According to the dancehall act, M.anifest is a brother and any supposed qualms between them were an illusion created by some fans.

According to him, he does not waste so much time on beefing with artistes because there are a lot of issues occurring in the ghettos he needs to put in songs to inspire the people in those areas.He indicated that if there was any beef between them, he would come straight at him but since there’s no beef, there’s no need.