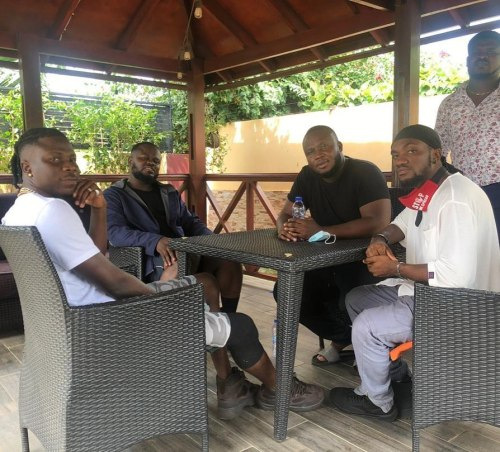 Highly Spiritual Music and their artiste, Mr Drew met with Dancehall artiste, Stonebwoy to render formal apologies to him for dragging his name in the song theft brouhaha.
This comes after Mr Drew’s ‘Eat‘ video featuring Stonebwoy was pulled down by Rotimi’s record label, Empire, after a formal complaint. Mr Drew had suggested in an interview that Stonebwoy knew about the song being a cover before he jumped on.

However, the BET Award Winner cautioned Mr Drew not to drag his name in the mud for trying to help. In an interview with Andy Dosty on Hitz FM, an angry Stonebwoy stated that he contacted Mr Drew to feature on the song because it felt right but was ignorant over copyrights of the song.

Stonebwoy said that he was later told the song was a cover, but he had thought Mr Drew’s managers were going to deal with that aspect before release. Not long after Stonebwoy’s interview, Mr. Drew took to his Instagram handle to offer an apology to the ‘Nominate’ hitmaker by saying “Thank you @stonebwoyb for showing me Genuine love and support .. Bless you Big Bro  thank you @cwesiotengofficial @kaywabeatz @jeezygh.”

In the video sighted by DCLeakers.com, Mr Drew disclosed that he never meant to drag Stonebwoy’s name in the mud after he had willingly chosen to bless him with a verse.

He pleaded to Stonebwoy to forgive him for the harm caused to his brand. Mr Drew also urged Ghanaians to leave Stonebwoy out of the issue as he had told them to do the right thing and his publisher failed do it.