Video of Mr. Drew Featuring Stonebwoy Taken Down by YouTube 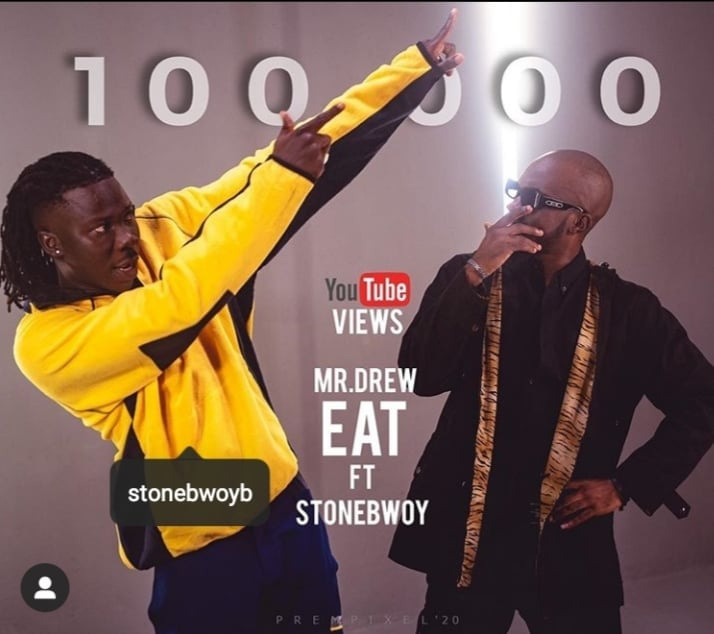 The music video of Mr. Drew’s song titled ‘Eat’ featuring Stonebwoy has been taken down by YouTube for copyright infringement reasons. The song which has been making headlines since its release reportedly had almost 150,000 views on YouTube by the time it was taken down.

Mr Drew born Andrews Otoo, himself posted a picture on his Instagram showing that the video to the song had hit 100,000 views on YouTube. Mr. Drew who broke out from the hit music reality show MTN Hitmaker released his latest hit song ‘Eat’ which was also set for major success considering the numbers it was getting on streaming platforms like YouTube and the massive airplay it was enjoying.

However, the music video for the song has been taken down by Youtube for copyright infringement reasons. The song is reportedly a sampled rendition of Power star, Rotimi’s ”Love Riddim”, a popular single from Rotimi’s ”Walk With Me” album released in July 2019. YouTube took the video down after Rotimi’s record label, Empire made copyright infringement claims against Mr. Drew’s song.

Considering that not long ago there was an altercation between Mr. Drew, Krymi, and their former label mate Kurl Songz over who actually owned the hit song ”Dwe”, the fans believe this story seems to vindicate Kurl Songz.

Given that the issue of copyright in music is a very delicate topic today and artists do not take it lightly when parts of their work are sampled without due permission granted, People are looking forward to Mr Drew and Stonebwoy’s reaction to this news with the story trending all over social media.