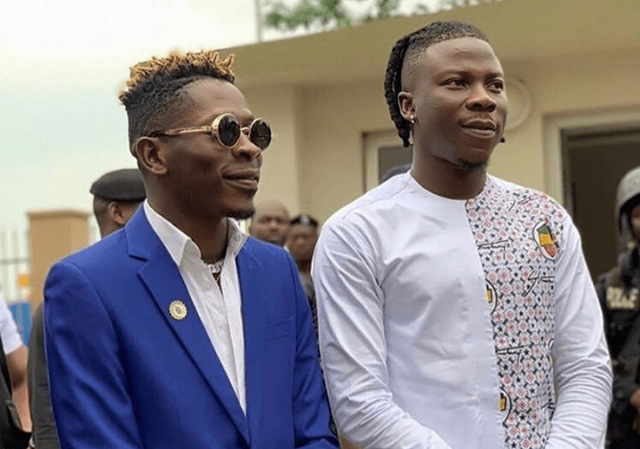 Stonebwoy defends his friendship with Shatta Wale claiming that it’s genuine and not a treat only for the camera. According to him, their rivalry had affected their fans bases in many areas across the country and hence they chose the best path they could for them.

In an interview with U Sey Wetin on Hitz FM Stonebwoy said “When they saw me and Shatta come out to make peace, it was not for the camera but for the people. It was for the fight that was happening in the ghettos.”

He continued and said that the rivalry between them was so bad that some of their fans could not go to same events, so they chose the best thing they could do and not lead them astray.

The ‘Run Go’ hitmaker said that he is not one to go through such an incident to use it as hype or play with people’s feelings. He told Da Don, host of the show, that he knows such kind of child’s play comes with consequences he does not want to deal with especially when their followers look to them as role models.

“The beef between Shatta and I was never planned, I will never mislead anybody to create some kind of hype over that type of stuff…so that somebody will sit at home and feel like we are playing with their hearts,” he added. Stonebwoy said that although he and Shatta Wale may not be the best of friends now, he is certain their relationship will grow.

He added that he does not appreciate some people ridiculing the efforts he and Shatta Wale are making to ensure that there is peace, always.“We laid down our egos and made peace for all our sake, by doing so we have taught them that there is one unifier which is peace,” he said.