The single is off Phyno's album 'Deal With It' which he released last year.

'Speak Life' visuals from PentHauze premiered on Friday, May 22.

Phyno raps all through the song as he addresses various issues among them asking people to trust in God and never lose hope. 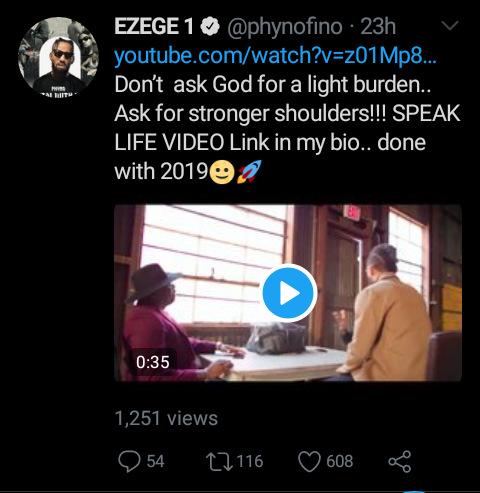 'Speak Life' (On God) has a mix of some English but a majority on Igbo, a language Phyno is known for rapping in.

Other visuals from the album that have been dropped this year include 'Get The Info‘ featuring Falz and 'God’s Willing' in which Phyno teamed up with Runtown.

While introducing the 'Speak Life' video to his social media fans, Phyno posted: "Don’t ask God for a light burden.. Ask for stronger shoulders!!! SPEAK LIFE VIDEO Link in my bio.. done with 2019."