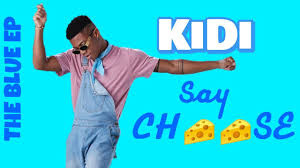 The 5-song album EP was well received by his fans; with his cover song “Say cheese” getting more than 20k views on YouTube in less than two weeks. The fans have described Blue EP as a collection of different genres that has brought a whole different Kidi out in the music industry.

Kidi whose real names are Dennis Nana Dwawena has been in the limelight since 2015 when he first caught the public eye. He then won the 2015 MTN Hit maker music competition that earned him fame, and a contract with the Ghanaian record label Lynx Entertainment who successfully released his official debut in the same year.

Since then, Kidi has been producing hit after hit. His singles “say you love me and”Odo” were a great success, proving that the young song writer and singer is indeed a hit maker.

In a Youtube video posted by Museafrica https://www.youtube.com/watch?v=k3ZgMLaeSGU on 6th May 2020, the artist had no intentions of working on any projects this year. His only plan was to focus on doing singles during this covid-19 lockdown period.

Nonetheless the current corona situation that the whole world is facing inspired him to work on this project would calm and comfort his listeners. He adds that His choose the name Blue because despite it being his favorite color, it also signifies order, calmness and serenity.
With the Lockdown, Kidi plans to keep working on new songs to ensure he keeps his fans entertained.