Mr Eazi Commits To Sponsor 3,300 Meals For The Vulnerable in Lagos 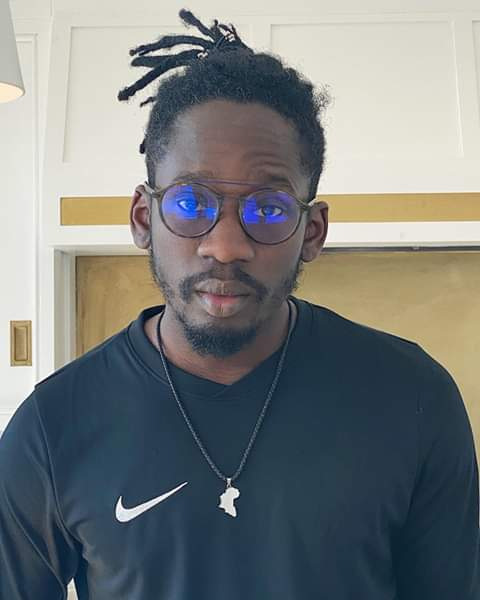 Nigerian singer, songwriter, and entrepreneur Oluwatosin Ajibade, better known by his stage name Mr. Eazi has joined a list of public figures who have come out to offer support to people most affected by the Coronavirus pandemic.

Mr. Eazi has committed to sponsoring 3,300 meals for the most vulnerable people in Lagos State, Nigeria.

In a tweet, the emPawa Foundation Chief Executive Officer (CEO) said the initiative will be in collaboration with the Food Bank Lagos.

Mr Eazi also revealed that he will be rolling out further similar initiatives "in the coming weeks" that will see up to 10,000 meals provided for the most vulnerable in both Lagos and Ogun States.

"I have a committee to sponsoring 3,300 meals in collaboration with the Food Bank Lagos, for some of the most vulnerable people in Lagos," read part of a statement that Mr. Eazi posted on Twitter.

"In the coming weeks, I will continue to work with other organizations across Lagos & Ogun states to provide 10,000 meals," added the statement alongside a tweet "Let’s all do our part." 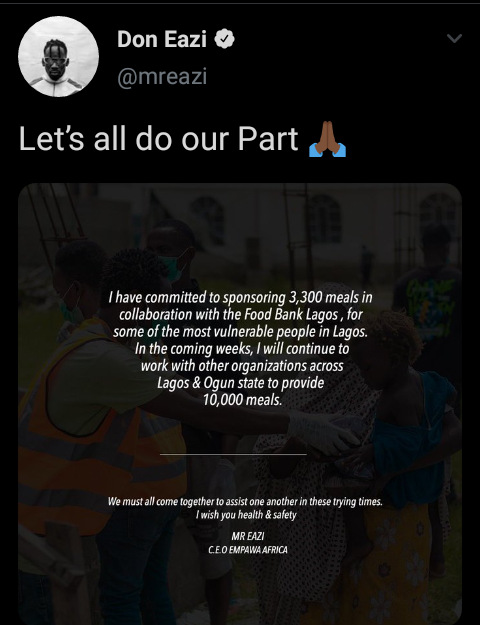 Lagos and Ogun are some of the states in Nigeria that have been on total lockdown for over a month now as the government of Nigeria puts in place measures to curb the spread of the highly infectious virus.

In a televised speech on Monday, President Muhammadu Buhari, however, said he had "approved a phased and gradual easing of lockdown measures in FCT, Lagos and Ogun states effective from Monday, May 4, 2020."

At the time of the President's speech, the West African Country had confirmed 1,273 cases of coronavirus and 40 deaths.

Apart from Mr. Eazi, the pioneer of Banku Music, a fusion sound he describes as a mixture of Ghanaian highlife and Nigerian chord progressions and patterns, another musician who has offered support during this pandemic is Davido.

Davido while unveiling visuals to the 'D&G' single featuring R&B singer Summer Walker said proceeds from the video would go towards supporting the Dolce & Gabbana and Humanitas Together for Coronavirus Research fund.