Visuals for L.A.X’s single ‘Gobe’ in which he features Nigerian music icon 2Baba is out.
The New Video was premiered by Rasaki Music on Friday.

Damilola Afolabi, known professionally as L.A.X had released the audio for ‘Gobe’ in February this year.

The New Video is produced by Clemzy and directed by AJE Films.

‘Gobe’ translated to ‘Trouble’ in English is basically a story of how L.A.X and 2Baba land in trouble for cheating on their women.

In one of the scenes, a woman, apparently his main chick, hits L.A.X in the head with a bottle who falls unconscious and is dragged to the car’s boot and driven to an unknown destination. 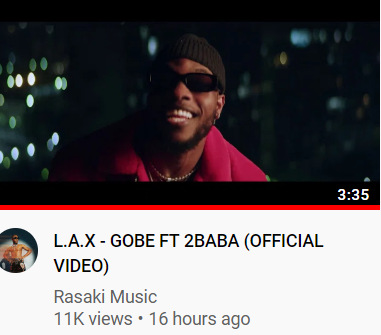 While in the boot, L.AX in one of the lines sings; “And I dey talk to Nneka, talk to Amaka, which one I go choose and I dey give Nneka, give Amaka make I no go lose And I dey follow other girls oh and I dey do this girls oh, Folake get belle, Anita comot belle, so Wetin I go o.”

The New Video has already attracted 11,000 views on YouTube within 16 hours of the premier, an indication that it might be a major hit.

‘Gobe’ has some captivating Afrobeatz bolstered with a thunderous Afropop pulse.
L.A.X who started his music career as a rapper has earned plaudits for his hypnotic live shows following successful Album with over 50 million streams across digital service providers and tours.