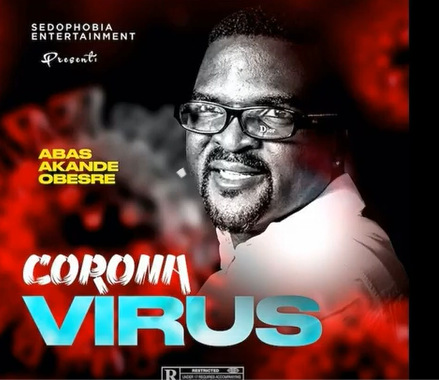 With the world fighting the Coronavirus pandemic, musicians, especially in Africa, have been going out of their way to use their influence by creating songs that seek to sensitize the public on how to take precautions against the highly infectious virus.

Already several songs have been released by artists with the likes of Tanzania’s Raynavvy featuring the country’s President, John Pombe Magufuli in an awareness song titled ‘Corona’.

But even as artists use music to create awareness, Nigerian Fuji legend Obesere has opted to release a song that sounds a warning to the virus.

In his new song dubbed ‘Coronavirus be Careful,’ Obesere famed for his single hit ‘Egungun’ warns the virus that it won’t be staying long in Nigeria.

The singer who recently joined efforts with fellow Nigerian Singer Zlatan Ibile in the ‘Egungun Be Careful Remix’ compares Coronavirus with the Ebola outbreak that was defeated.

Perhaps the song seeks to give hope to Nigerians that despite how highly contagious the virus is, it will be defeated.

At the start of the song ‘Coronavirus be Careful’, that has borrowed the very same beats like the ones used in the original ‘Egungun’ song, Obesere sings; “Coronavirus Egungun be careful…ask your brother, your brother Ebola….”

Ebola was first reported in Nigeria on July 20, 2014, and led to the infection of 19 people, 7 of whom died. The World Health Organization, however, declared Nigeria an Ebola-free nation 92 days later on October 20, 2014.

Only the audio version of the ‘Coronavirus Be Careful’ song has been posted on YouTube.