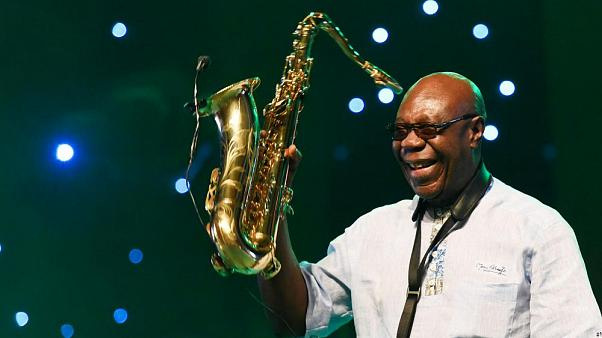 The 86-year-old musician, who was recovering at a hospital in France, died after having tested positive for the coronavirus.

Cameroonian jazz legend, Manu Dibango, has passed away according to reports by the BBC.

The 86-year-old musician was "recovering and resting in serenity" at a hospital just outside Paris, France, after having tested positive for the coronavirus.

Dibango's family confirmed his death in a Facebook post which reads: "It is with deep sadness that we announce the loss of Manu Dibango, our Papy Groove, who passed away on 24 March 2020, at 86 years old, because of Covid-19." The family also communicated that a public memorial service would be held at a later time and that presently, they would be conducting his funeral in private.

OkayAfrica's Damola Durosomo describes Dibango as one of the "foremost pioneers of Afro-jazz, known for his fusion of funk with traditional Cameroonian sounds." Durosomo adds that, "His iconic1972 B-side "Soul Makossa" was a global hit, which both Michael Jackson and Rihanna famously referenced in their hit songs "Wanna Be Startin Somethin," and "Please Don't Stop the Music," respectively—reportedly without Dibango's permission. He later settled a lawsuit with the artists over their use of the track's hook."

A giant has fallen indeed and the continent now mourns Dibango and his decades-long contribution to jazz and music as a whole—an indelible discography.

Dibango's death comes at a time where Africa's number of confirmed number of coronavirus cases stands at well over 1000 and the deathtoll at just over 20. Other African celebrities and public figures to confirm having tested positive for coronavirus include Idris Elba and more recently, the late Nelson Mandela's grandson, Ndaba Mandela.

Get More on Okay Africa