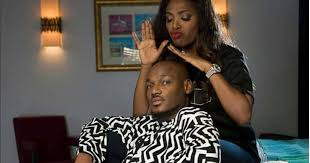 Innocent Idibia popularly known as 2Baba and Annie Macaulay-Idibia have celebrated their 7th wedding anniversary to prove that marriage is indeed beautiful against all odds.

Annie Idibia and 2Baba tied the knot at a private party in 2012 and later on a white wedding on March 23, 2013, at an adorning event in Dubai, United Arab Emirates (UAE).

Taking to his Instagram page on Monday 23rd, the two lovebirds adorned in bathrobes danced along to Warrior, a big tune in his seventh studio album ‘Warriors’ which was released on Friday 28th, 2020.

2Baba and Annie Idibia have been blessed with two girls namely Olivia and Isabella while at the same time maintaining significant relevance in their respective careers since the onset of their union.

2baba is not only an award-winning singer but also draws massive commendations and recognitions from key industry players due to his consistency and nature of work which has seen him put out several hit albums including ‘Ascension’, ‘Face2Face’, ‘Unstoppable’ and ‘Grass to Grace’.

In an exclusive interview with the Premium Times Nigeria, Nigerian musician star, Zaaki Azzay, who is recognized as one of the pioneers of Hip-hop music in Nigeria, praised 2baba on remarkable talent and hard work by calling him ‘hand of God’. Zaaki has disclosed how 2baba is the most relevant Nigerian musician in this era as from his good musicianship.

Annie, the multitalented, has been on the same radar as she has also been pulling the strings as a model, media personality, and actress. In 2009, she was nominated in the “Best Supporting Actress” category at 2009 Best of Nollywood Awards but also won ‘Fast Rising Actress’ gong at the 2016 edition of African Entertainment Legend Awards.