Ykee Benda Unveiled as the Official Brand Ambassador for Prudential Uganda in Deal worth Millions. 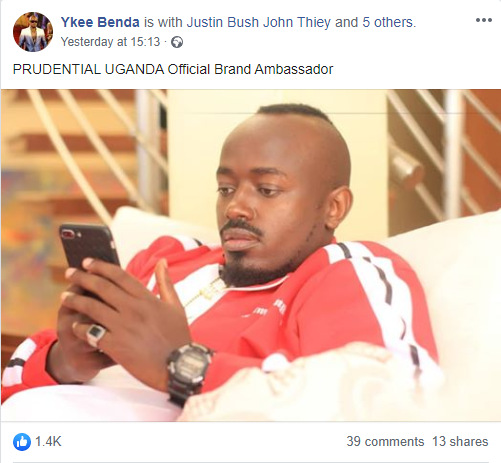 Ugandan artist Ycliff Tugume, better known by his stage name Ykee Benda, is already living the dream in this new year. From the successful music career so far, the Mpaka Records boss has landed yet another brand ambassadorial role.

The ‘Bomboklaat’ hit maker is the new brand ambassador for the Prudential Uganda, an insurance company. The singer will officially begin his new role at the company by shooting the commercial adverts for billboards in and around the country.

Taking to social media, an elated Ykee Benda expressed his joy for the amazing and lucrative opportunity.

Ykee Benda will surely smile his way to the bank as the deal comes with a whooping sum of 100 million Ugandan Shillings. He put pen to paper today afternoon alongside his son, Dante.

Besides the juicy deal, Ykee will also start saving with the insurance company for the son as an assurance for a great future and also raise awareness about the different insurance policies offered by Prudential Uganda.