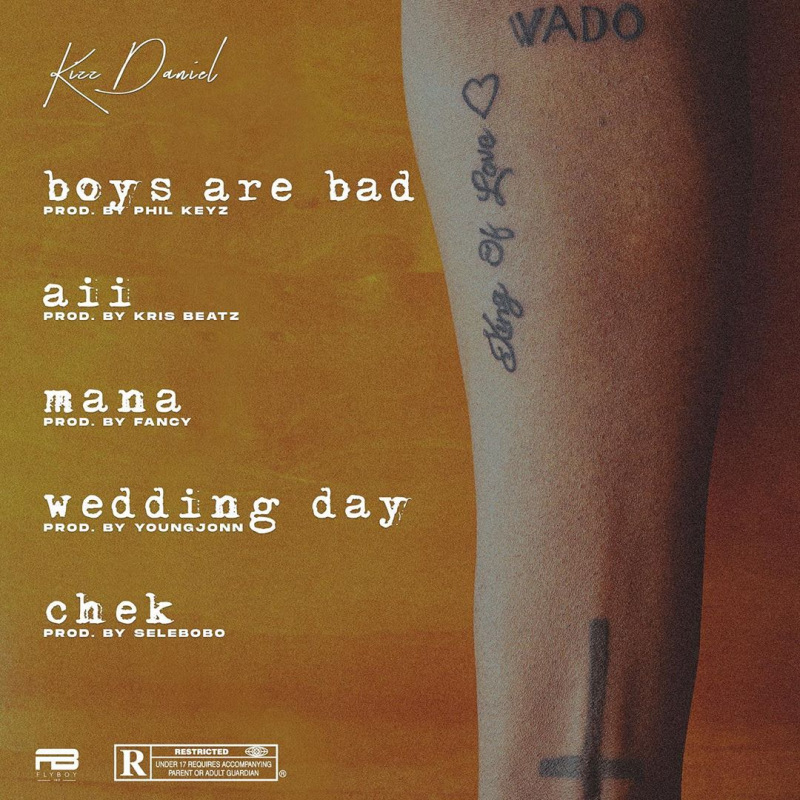 Kizz Daniel has finally unveiled the tracklist and artwork for his new EP 'King of Love'. It contains 5 tracks produced by Phil Keyz, Kris Beatz, Fancy, Young Jon, and Selebobo.

Taking on his IG and Twitter accounts, the “Jore” hitmaker revealed that he would be releasing a new album titled “King Of Love”. He went as far as getting a new tattoo on his wrist to tell fans the album is one that would remain evergreen but did not reveal the release date. Kizz Daniel has, however, given something for fans to feed on before the album is released.

Taking to his Instagram page, he shared a photo of the album cover which is a photo of his newly gotten tats. King of Love will be Kizz Daniel's third studio album after New Era(named Album of The Year at 2016) and No Bad Songz (2018) under FlyBoy Inc which contained 20 Songs including the pre-released One Ticket.

Jaho, current biggest sensation in Nigeria, has already hit over 1.2 million YouTube views since its release. Now rated among the top 10 Nigerian male artists, this fast-rising fresh talent whose fashion sense and lifestyle has created him a niche as the ‘bad boy’ to watch as said by Henry Odugba, the CEO of Dove Entertainment “Kizz Daniel is the new King of Love in Nigeria and he has become popular for wearing that ‘bad boy’ demeanor.

After enjoying the limelight since 2017 when his career took off (after he announced his controversial split from his record label G-Worldwide and created his own label FlyBoy Inc.) it now looks like his star is set for a rise. Kiss Daniel will be pushing the buttons further after a progressive career that saw him ditch his degree in Water Engineering for music in 2014.