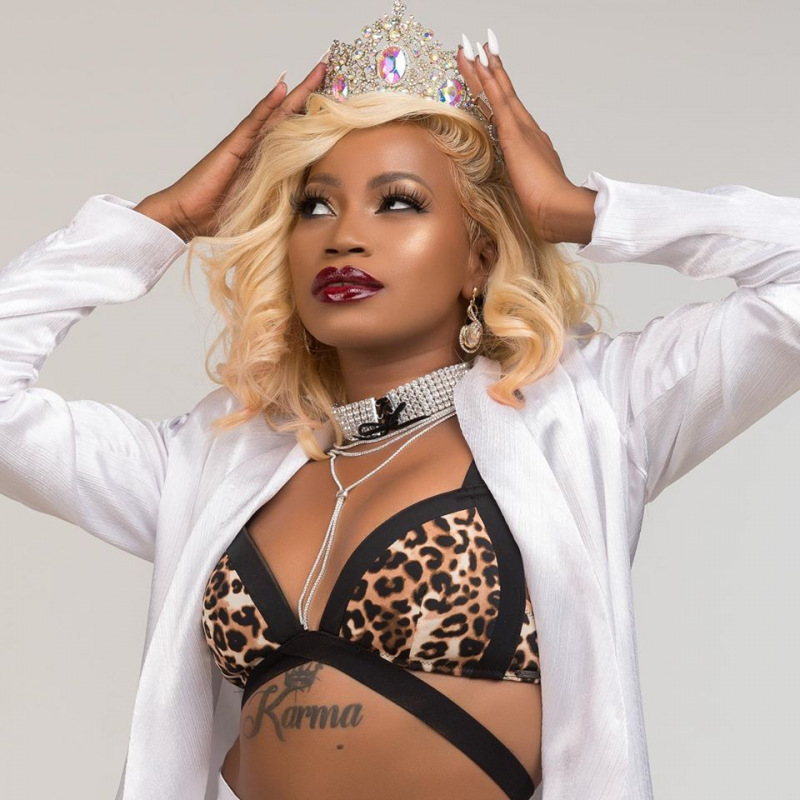 Sheebah Karungi is without a doubt one of Uganda’s hottest talents. Her style of music and unique energy on stage have seen her rise to the top.

Mdundo is here to help you figure out how a simple girl, born and raised from the suburbs Kawempe would turn out to be one of the best female artists we have riding the music industry.

After completing her education at Kawempe Muslim Primary School, she joined Midland High School. Her dancing career started out at a tender age of 15 in Stingerz before she joined the 'Obsessions' group in 2006. This is where she picked an interest in music, recording two songs before she quit to launch her solo career.

She released her first single, 'Nkunyeyeza' in 2010 also collaborating with then big artists like KS Alpha (Bulikyenkola), Coco Finger(Baliwa), Sizzaman(Automatic) but her breakthrough point was when she dropped her hit single 'Ice cream' that saw her dominate the airwaves in 2013.

2016 was a very big year for Sheebah. She received a MTV African Music Awards (MAMA) 'Video of the year' nod for her 2016 Kisasi Kimu hit. From her music dominating airwaves, featuring on various media outlets, endorsement deals and more awards, she chose to wrap up the big year with her first ever music concert dubbed 'Nkwatako' album launch on December 2, 2016 at Hotel Africana, Kampala.

In 2017, she featured in Coca Cola's Coke Studio and in the same year, she launched her second album, 'Karma' in a sold out listening party. In the same year, she received an accolade in the Mdundo Awards after her music was most downloaded on the Pan African music website.

Her third album was 'Omwooyo' in 2018 accompanied with her second concert at Africana where she has managed to pull off a great crowd.

Besides being nominated for awards like Nigerian Entertainment Awards, AFRIMA, Sheebah has received some international recognitions; last year, she was listed among the top 5 artists to watch out for in 2020 by BBC.

Her management that makes the magic happen.

She is currently signed under Team No Sleep with one of the best music managers, Jeff Kiiwa who has made sure that her music dominates both the local market and also cross boarders. From being recognized in both local and international awards to bagging numerous ambassadorial deals, the Karma Queen has surely made a name for herself in this competitive industry.

However much there has been reports that she is currently battling her manager over her music and Munyonyo based mansion, they have both not spoken about it publicly and the news of their bitter split still remains a mystery.

Her prestigious Fan Base, the famous SHEEBAHOLICS.

Her relevance in the music industry for the past 7 years has marked her place as the best female musician in the country. This has seen her fan base, 'Sheebaholics' grow day by day into one of the biggest in the country. They have a great support system and they always come through for her; from fighting online wars, to celebrating her achievements.

Does Sheebah have a life outside music?

One thing Sheebah has mastered besides her music career, is a being a good entrepreneur. In March 2018, she launched her new hair extensions business, Sheebah By Natna Hair, at The Prism shortly after unveiling her own clothing line, Sheebah Collections.

Just because she wants to diversify, Sheebah who has always identified as a feminist came up with a brilliant idea to support the female gender four years ago and through her news company 'Sheebah Establishments Company', she has started manufacturing 'Holic Pads' to support women.

If we are to go deeper into her personal love life, Sheebah has never openly introduced any man before the public and on many occasions, she has maintained that she is not interested in settling down for marriage.