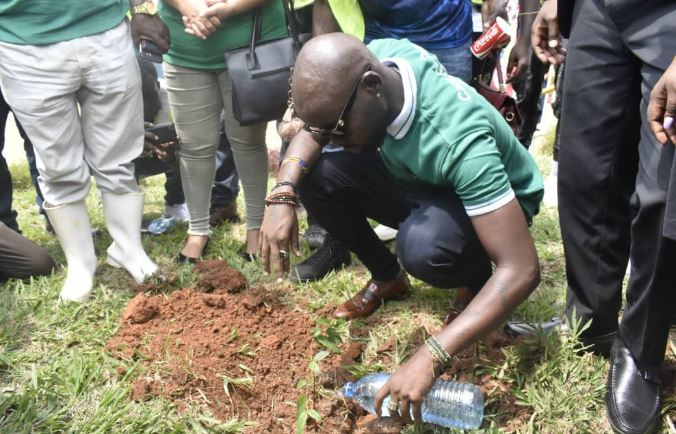 Eddy Kenzo has been named green ambassador. The singer will spearhead a conservation campaign in which he will raise awareness about climate change and also encourage masses across the country to plant trees.

Championed by Environment Social Safeguards International (ESSI) in partnership with Coca-Cola Beverages Africa(CCBA) in Uganda and National Forestry Authority, the initiative targets to plant over 4000 trees in effort to conserve the environment.

“I am excited to be working with ESSI on this campaign to plant trees across the country and want to encourage all Ugandans to join this initiative,” Kenzo said. “Planting a tree is a blessing because you are giving life while also making our country look beautiful. It is time for us to all go green.”

According to Khasim Ngabirano, the CEO Environment Social Safeguard International, the campaign aims to create awareness about the importance of tree planting in combating negative effects of climatic change. He noted that trees play an essential role in mitigating the impact of climate change and we therefore should act now to mitigate its negative effects.

Simon Kaheru, the Public Affairs & Communications Director Coca-Cola Beverages Africa in Uganda expressed excitement about this partnership saying: “We are looking to beat climate change but also protecting the environment by planting trees. Planting trees is one of the most important things we can do as Coca-Cola Beverages Africa in Uganda to contribute to conserving the environment.

“At Coca-Cola, we place priority on watershed protection and conservation, and we are proud of the work that ESSI has done in Uganda to help restore trees. The trees not only add beauty and provide shade but they also provide a barrier to storms and help retain water in the soil, which is very important for the country.”

Uganda’s forest cover has been depleted to 8% up from 24% in 1990s, and this is largely attributed to human encroachment for different activities such as agriculture and urbanization.