UGANDA: Fik Fameica to bounce back in 2020 with a live concert. 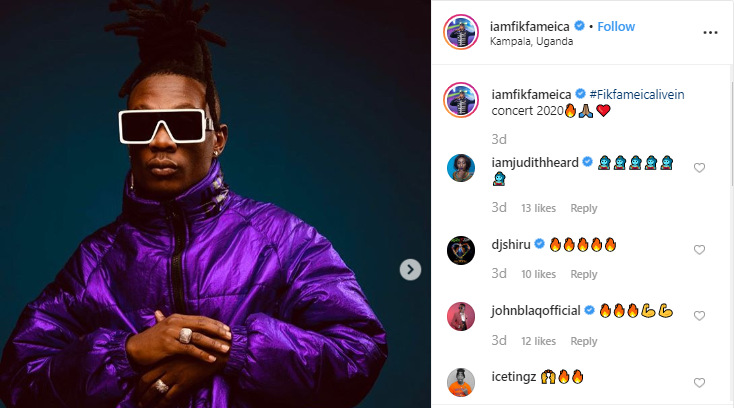 Fast rising and award-winning Ugandan rapper, Shafik Walukagga, commonly known by his stage name, Fik Fameica has some big news for his fans.

Following questions from his ardent followers and fans, Fik Fameica has finally bowed to the pressure and announced that he will be back in another live concert come 2020.

The big reveal was made over the singer’s social media handles without revealing more details about the exact date, venue and ticket prices. Fellow artists and other celebrities showed their support as soon as he made it public.

It should be remembered that Fik Fameica had his debut concert last year on 14th December 2018 at Kyadondo Rugby Grounds but he was disappointed because of the low turn up.

People blamed the flop on the youngster for staging a huge concert without many hit songs. He has however been working hard since then and has a number of songs like Mwaga ft Wasafi’s RayVanny, Omu Bwatti ft. Nigeria’s Patoranking, zzina, Tell Me, among others that received massive airplay.

Fik Fameica’s music that targets a young and vibrant audience that is the biggest composure of Uganda music fans and has subsequently become a sensation on the music scene.

The artiste is best known for his distinguished kind of rap music that has made him compete successfully in this dynamic music industry.

We shall keep you posted!