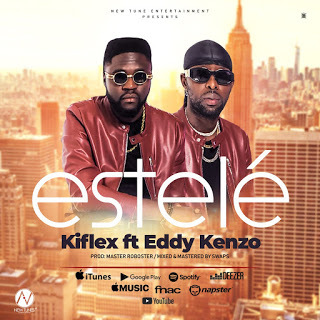 The Big Talent boss is traveling in different countries and we can safely say, he was right when he cried out to the Ugandan Government to recognize him for the job well done exporting Ugandan music to the different parts of the world.

Not only is he sourcing for music projects, Eddy Kenzo is also winning awards, something that is making him more popular in these countries.

The 'Signal' hit maker has added yet another jam on his long list of international collabos and it is with none other than US-based Cameroonian star, Kiflex.

Kiflex is a songwriter, producer and artist commonly known for his songs like Maria, Baddest Queen, Coco, No Dey Worry, Marry You, Fine Boy, For My Sake among others which have made him popular in Africa.

The two music stars bring us a brand new song sang in both English and a little Swahili titled 'Estele', and according to Kiflex, 'Estele' in swahili means "Don't Worry".

The Afro-pop song is basically a love song with Kiflex assuring his partner never to worry because he will never leave her.

The Song was Produced by Master Roboster, Mixed and mastered by Swaps while the clean video was shot and directed by Thirty6vision.