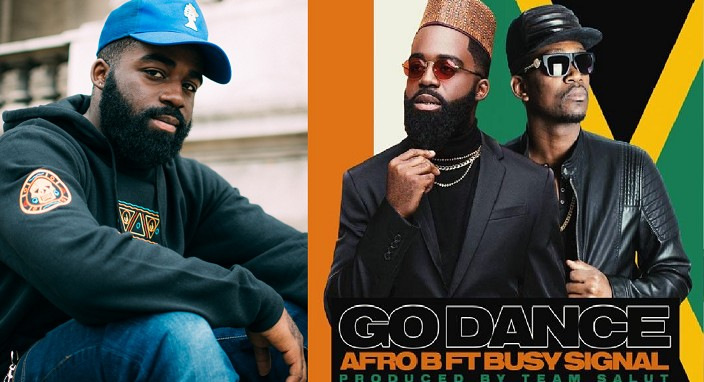 Afro B is the master mind behind the mega global hit ‘Drogba' . The awesome jam had two remixes ,Afro B did one with Nigeria’s Wizkid and the other with American rapper French Montana. After global domination of the air waves with his afrowave music (no pun intended ) his now back with a new project dubbed ‘Go Dance' and enlists the services of Jamaican superstar Busy Signal.

He dropped an awesome animated lyrical video last month for ‘Go Dance’.  The video saw him rack over 1.9million streams, so why not ride that wave once again?. His dropped another official video to the Team Salut produced summer time banger. The new video sees Afro B enjoying the beach life, after all it is a summer time banger. His surrounded by beautiful women dancing to the afrobeat and enjoying the summer time sun. The visuals for the song were Directed by 300k and he did a marvelous job merging two different locations rather superbly. If your keen enough, you’ll notice, Afro B and Busy Signal are in two totally different locations and all the Jamaican and Ivory Coast flags and dancing are used to throw us off, of that fact. Afro B and Busy Signal were not together during the shooting of this video. Don’t  worry It took me a couple of rewinds to notice.

‘Go Dance' is the ultimate polite party vibe.  With its infectious Afro beat and catchy hook , it just won’t get out of your head.

“She got dance for thee money ahh

She go dance for the money tap,tap”

Afro B invades your mind with the catchy hook. It’s undeniably a good song. Kudos to Afro B and Busy Signal for the summer time banger.