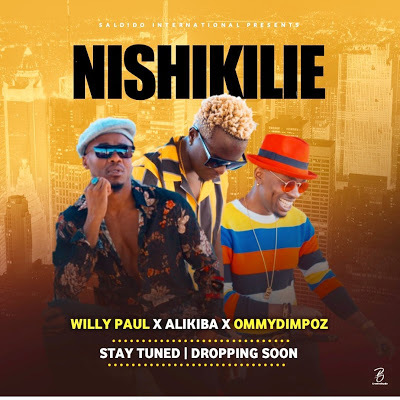 Nishikilie, the latest song by controversial Kenyan musician Willy Paul and top Tanzanian singers; Ali Kiba and Ommy Dimpoz had been taunted to be one the biggest musical collaborations this year.

Released officially on Friday, the song has lived up to its expectation managing over 500,000 views and 3,000 comments, just two days after being posted online.

Vocally, all the three musicians have given their ‘A-game’ and their transition is top notch, considering it is the first time they are working together.

On social media, the song has created a buzz with many tweeps congratulating the trio for the interesting musical creation.

The video is simple, but interesting to watch especially the dance moves from the dancers and Willy Paul.

A section of Kenyans criticized Pozee for releasing the track, adding that he has veered off from his calling.

In a long Instagram post, Willy Paul, however, noted that he was evolving musically and not everyone will love his new style of music.

“I'm grateful for the love and support over the years. I am evolving into a new phase of my life. Some of the music I make now may not fit in with your view of me, and may not resonate with you but know always that I am doing my best to be true to myself.