Pitson Nominated for the Male Artist Of The Year in the upcoming Groove Awards. 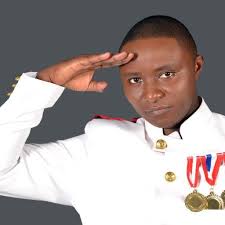 Gospel artist Pitson and "Lingala Ya Yesu" hitmaker has been nominated for the Groove Awards 2014 in the Best Male of the year category.

During an interview with Kiss 100's lovely miss Adelle Onyango, Pitson revealed that he was surprised by the nomination.''Kutoa ngoma moja then inakuwa hit si kawaida. ni blessing " he said.

This inventive artist has been saved since his teenage years for those who did not know. His "Lingala Ya Yesu" song has captured as much skeptics as enthusiasts,leading to a debate whether the song is gospel. Pitson has stood firm saying he does what he does only for God.

Pitson has so far released five tracks and when asked what he hopes to achieve next, he says, "Making one hit is great. But if i could make another, i would feel accomlished". With his creativity and devotion to his God i have no doubt he will not be a one hit wonder. As for the groove awards, we at Mdundo wish him the very best!