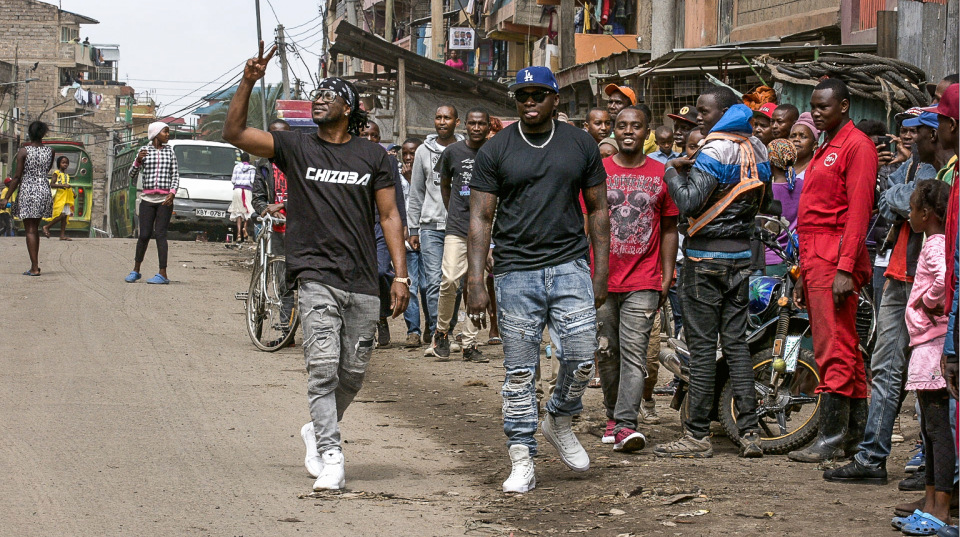 When a guest comes to town surely you show them only the great and the glistening and glamorous in your city, right? Especially if you are one of

Nigeria’s hottest hip-hop stars and an Afrobeat legend has come all the way from Lagos to see you.

But sometimes people get better insight into who you are if you show them where you have come from. And that was exactly the approach of Kenyan rapper Khaligraph Jones too when Nigerian artist Rudeboy came to town: “We needed a good introduction to each other.” And that introduction was his hood.

For those who don’t know, hook master King Rudy a.k.a Rudeboy was once part of P-Square, the group that put urban Nigerian sounds on the worldwide map and laid the foundations for the global force that is now Afrobeat.

Kayole is far, far away from the red carpet swag of the music scene (He won Best Rap Act at the AFRIMMA’s in Dallas, Texas, USA last year) and it was there that respected rapper Khaligraph Jones not only visited his old school and former place of employment as a Chapati seller.

A key visit was Big Beats Studio, a tiny studio in a small shipping container gave Rudeboy an unexpected flashback. “This takes me waaaay back to my struggle and hustle and makes me think of where I am today,” he explains. Nodding his head and playing out his very first track Khaligraph Jones says: “This place is very special to me as it’s where I laid my foundations as a musician.”

As they joined youth in the streets bumping his tracks and chanting the chorus of Khaligraph’s latest hit, it was hard for Rudeboy to believe that a mere four years ago this was where his new Kenyan friend lived. “I saw where he used to stay, you can tell this guy went through a lot!”

As the two stars climbed onto the roof of the building and the sun set over the hood, the great energy and inspiration of their day out sunk into their heads, and the melodies, street slang and topics that will make up their Coke Studio Africa track started to come…

Kenyan star Nadia Mukami makes her debut on the Big Break segment, alongside King Saha (Uganda) Yared (Ethiopia) , Shellsy Baronet (Mozambique) and Jux (Tanzania). Watch out for more on that.