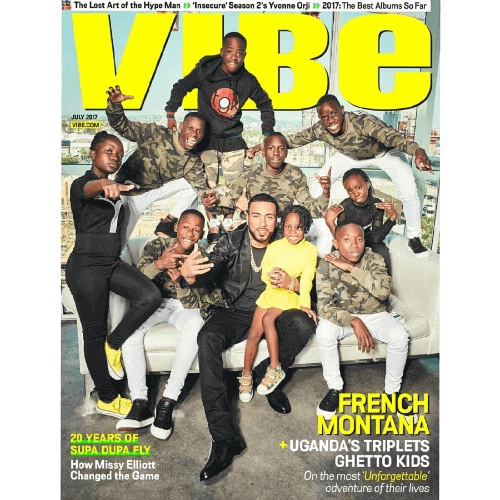 This talented Ugandan youth dance group made their debut on the world map when they appeared alongside American singer French Montana to perform his hit ‘Unforgetable’ during the BET Awards 2017 in Los Angeles.

The group dubbed Triplets Ghetto kids had been sought out by French Montana when he noticed their dancing skills on youtube.

The singer in March this year travelled to our neighbor Uganda to get them to appear on his video. Their choreography impressed French so much he arranged for visa’s for the group to go to the US for the BET performance.

The youngsters are comprised Patricia, Ashley, Ada, Kokode, Fred, Isaac, Kokode, Ronnie and Man King, and have added another feather to their cap.

They have made it to the cover of VIBE magazine alongside French. See the picture below. French posted the picture on his social media with the caption

Unforgettable wasn’t just a record for me it was personal #JungleRules Love seeing these kids happy real vibe.

In the magazine interview French opens up about his visit to Uganda, and what his experience taught him about life.