KENYA: It’s Revealed That Diana Marua Aka Bahatis “Prayer Partner” Is An Employee Of His Music Label Production. 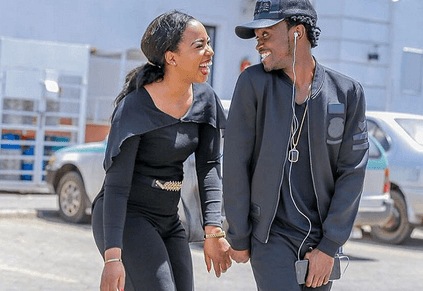 They are referred to as prayer partners and apart from internalizing and holding prayer programs together, Diana Marua is Bahati’s employee.

This is what is called boss-employee relationship or should I say office romance? Well, in a local Tv show, Diana Marua, Bahati’s video vixen-cum bae revealed that Bahati took her in and employed her in the PR and marketing department.

Now you can see where all these publicity stunt ideas come from. From how I understand it, a public relations personnel is expected to help Bahati reach his fans and by doing that, they have to get all their attention to him. Let’s hope apart from the relationship the two have, Diana is doing quite a nice job.

The two have been hitting the headlines for sometime now with their prayer partner game which has got everyone talking. At first, this was not received well by some fans but it has since then become the slogan of the town. In an exclusive interview with Bahati, the Kumbe Kumbe hit maker said he never imagined the word prayer partner becoming so popular but to his surprise, it is everyone’s cup of coffee.

After a long silence together probably trying to avoid being questioned about it, Bahati seems to be letting the whole world know about his eye candy.